Despite a sharp drop-off in automobile purchases, Arkansas Retail Sales increased sharply in January (seasonally adjusted).  Total Retail and Food Service Sales increased 6.1% from December.  Compared to a year earlier, sales were up 11.2%.  National Retail Sales statistics from the Census Bureau showed a January increase of 7.7% and a year-over-year increase of 9.6%. 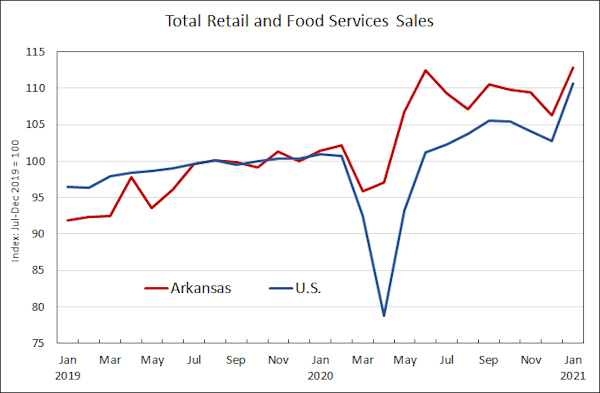 As shown in the table below, January retail sales featured a sharp drop-off in measured automobile sales, down 10.2% for the month and down 9.6% from a year earlier.  The sharp decline might be anomalous;  auto sales are recorded when the auto is registered and taxes paid by the buyer, and some registrations in February might have been delayed by harsh winter storms.  Sales at nonstore retailers, which include internet sales, showed a slight decline for the month but were up 46% compared to a year ago. 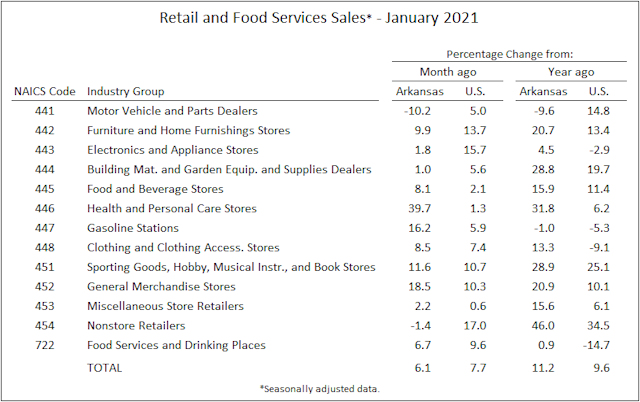 Arkansas retail sales generally continue to show a more robust recovery from the pandemic-related economic downturn than have sales nationwide.  The U.S. Retail Sales data show ongoing year-over-year declines in Electronics and Appliance Stores, Clothing and Accessories Stores, and Food Service & Drinking Places.  In each of these categories, Arkansas sales have surpassed the levels of a year earlier.  Perhaps most remarkable, restaurant sales have recovered to pre-pandemic levels in Arkansas but are still down 14.7% nationwide. 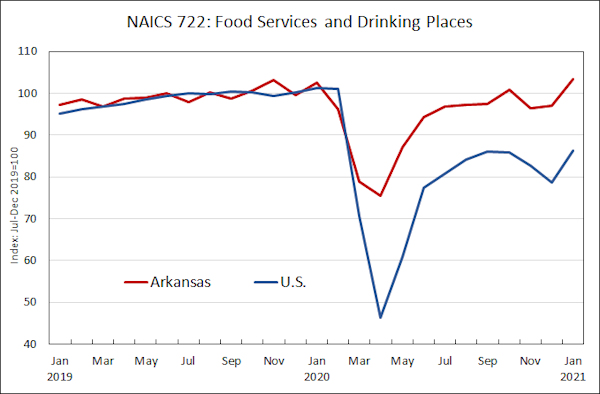 Sales at gasoline stations remain lower than a year ago, both here in Arkansas and nationwide. That decline reflects, at least in part, significantly lower gasoline prices.  Although rising more recently, the average price for gasoline in Arkansas was $2.15 in January 2021, down from $2.25 in January 2020.

County Data
With the exception of gasoline sales, the Arkansas Retail Sales data are derived from county-level reports on sales tax collections (see methodology notes) so we can break down the total sales figures by county (not-seasonally adjusted).  As shown in the interactive map below, year-over-year growth rates for Total Retail Sales ex Gasoline growth was positive in 70 of Arkansas’ 75 counties.  Growth rates exceeded 20% in 13 counties, with a high of 33.5% in Crittenden County.

As noted above, a sharp drop in automobile sales was a factor reducing growth rates around the state.  When we remove that component, Retail Sales ex Gas & Auto showed positive growth to be even more prevalent.  Only one county (Lee County) showed a year-over-year decline (-2.1%).  47 counties showed growth rates of over 20% and 15 counties exceeded 30%.  The fastest growing county was Crittenden county, up 39.5% from the previous year.

Data for Arkansas Retail and Food Service Sales for July 2017 through January 2021 are available in an Excel Spreadsheet:  Arkansas-Retail-Sales-Jan-2021.