Labor markets in Arkansas generally continued to improve in April, but at a much slower pace than in the early months of the recovery.  First, the state’s unemployment rate was unchanged at 4.4%, still significantly lower than the national unemployment rate of 6.1%. 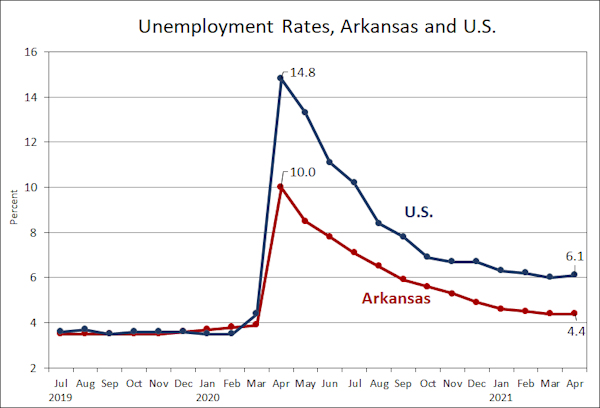 The underlying data from the household report showed an increase in the number of employed (+2,779) and a decline in the number of unemployed (-795), so technically the Arkansas unemployment rate declined in April, just not enough to register a change of even one-tenth of a percent (and not nearly enough to be statistically significant).  The increase in employment was also associated with a net increase in labor force participation. 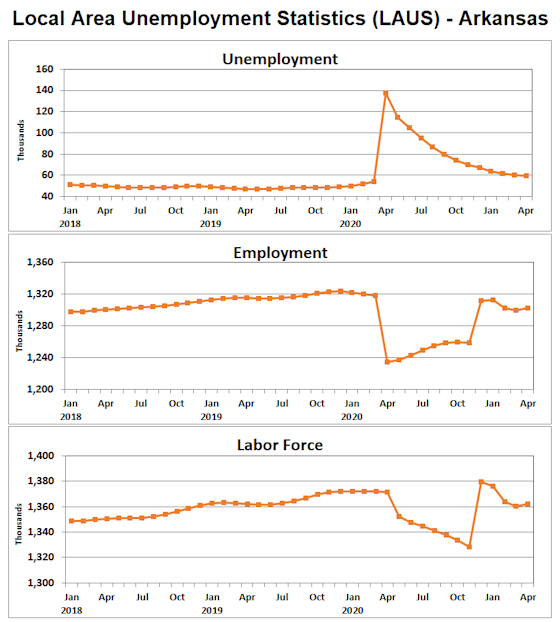 Payroll Employment
Nonfarm payroll employment was little changed in April. The not-seasonally adjusted data showed an increase of 6,100 jobs, but much of that increase was in industries that typically add jobs during the spring, including Leisure & Hospitality, as well as Administrative and Support Services.  After seasonal adjustment, Arkansas payroll employment showed a slight decline – down 1,300 jobs.  Today’s report also included an upward revision of 1,200 to the preliminary employment total reported for March, so the net new information indicates little change.  Arkansas employment remains 2.4% lower than in February 2020.  By comparison, U.S. employment is still down 5.4% from the previous peak. 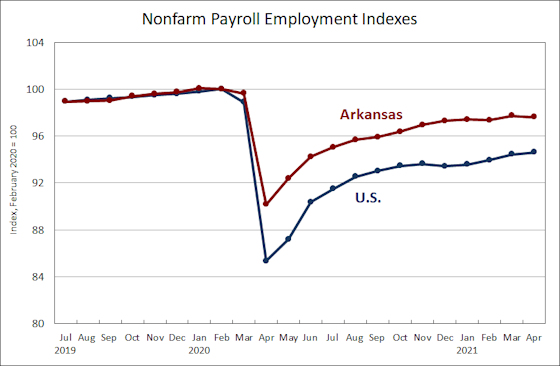 As shown in the table below, employment declines showed up in the Trade, Transportation and Utilities sectors, as well as in Financial Services.  Nondurable manufacturing experienced a decline in April that was enough to make the year-over-year change slightly negative.  With the exception of Financial Services, the service-providing sectors all added jobs in April.  Within the broad super-sectors, noteworthy increases were reported in Administrative & Support Services (a component of Professional & Business Services), as well as the Accommodation & Food Service component of Leisure & Hospitality. 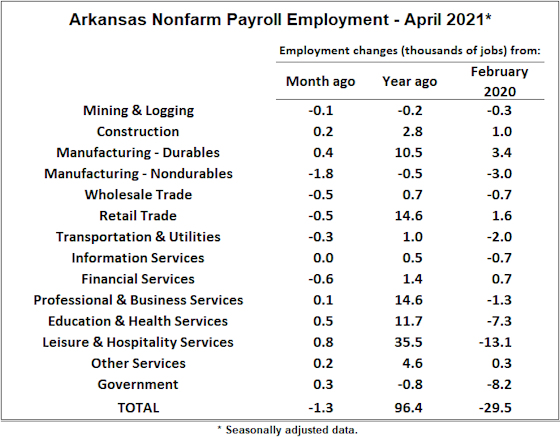 It was one year ago the employment hit bottom, so the year-over-year figures this month directly measure the recovery from the downturn of March-April 2020.  Over the past 12 months, the state’s payrolls have increased by 96,400 with significant gains in the sectors that were hardest-hit during the downturn.  Several sectors now show higher employment than before the pandemic-related downturn, including Durables Manufacturing, Retail Trade, Financial Services and Other Services.