The Bureau of Labor Statistics reported today that unemployment rates in June were lower than a year earlier in 328 of the nation’s 372 metropolitan areas.  In Arkansas, unemployment rates were down sharply in every metro area.  The smallest decline was for Little Rock, down 0.9%.  The unemployment rate in Pine Bluff was down 1.7% from June 2011. 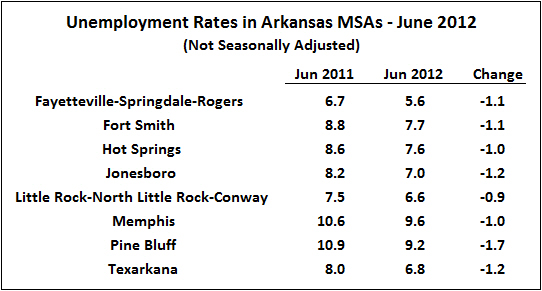 Typically, month-to-month changes in the not-seasonally-adjusted unemployment rate data are dominated by predictable seasonal movements.  But the May-June seasonal effect is rather small, so the smoothed seasonally adjusted estimates for metro area unemployment rates this month are very close to the unadjusted data.  As shown in the table below, unemployment rates declined in 6 of the 8 metro areas.  Unemployment in Fort Smith was unchanged, and the rate ticked up one-tenth in Memphis. 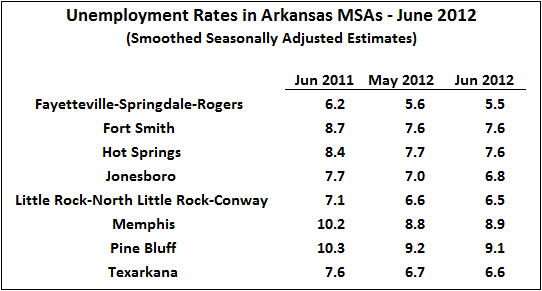 Statewide data released on July 20 showed a monthly decline for Arkansas, down 4,300 jobs (-0.4%), but today’s data showed employment increase in all 8 of the state’s metro areas.  Employment in the Little Rock metro area was essentially unchanged, but for some MSAs the increases were substantial:  Jonesboro, Texarkana, and Pine Bluff all saw monthly increases exceeding one full percentage point. 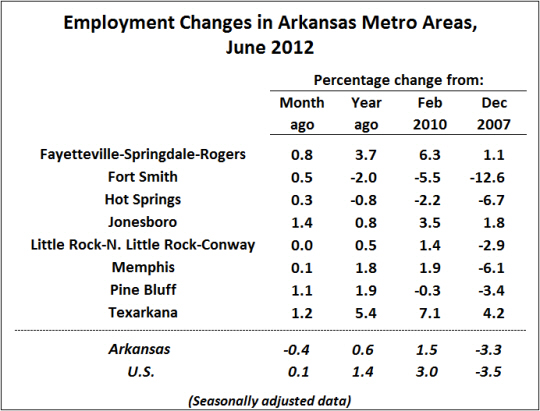 The apparent disconnect between metro-area employment gains and statewide employment losses in June has several possible explanations.  It may be the case that most of the job losses took place in the non-metro area of the state, offsetting the metro-area gains.  Another possibility is that metro area job increases are taking place largely in the non-Arkansas counties within those areas, with counties on the Arkansas side of the border lagging.   Then again, it could just be a statistical anomaly due to sampling error or some other data discrepancy.  Unless the divergence between metro and state employment trends persists, however, it should not be a cause for great concern.

With the June payroll numbers now available, we can take a step back and consider the the longer-run trends using quarterly-average data.  The chart below shows quarterly payroll employment for Arkansas metro areas, using the peak of the previous economic expansion (2007:Q4) as a common starting point.  Texarkana, Jonesboro and Fayetteville now have higher levels of employment than before the recession.  Little Rock remains about 3% below the previous cyclical peak, with the other metro areas in the state lagging further behind.  Fort Smith, where employment has experienced a cumulative decline of about 13%, saw a welcome upturn in employment during the second quarter. 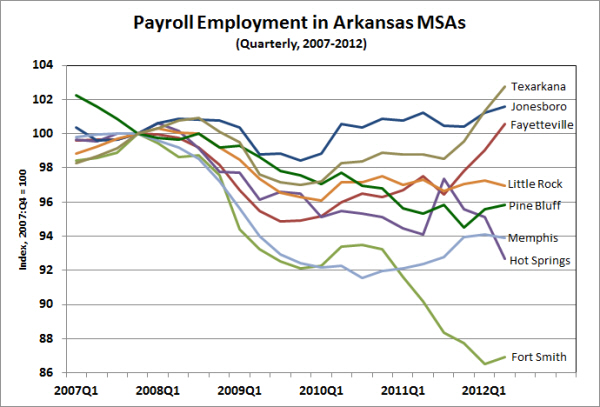