Weakness in sales and use tax collections in July suggests a downturn in Arkansas Taxable Sales (ATS) in the second quarter.  According to the data from the July general revenue report — which roughly correspond to sales during the month of June — sales tax receipts were down 0.6% from the same month a year earlier.  On a quarterly average basis, this implies that ATS declined by 0.3 from the first quarter to the second quarter of 2012.

Declining gasoline prices drove a sharp decline in gasoline sales as well.  The average price of gallon of regular unleaded gasoline in Arkansas was $3.22 in June, down from a peak of $3.74 in April.  Total sales of gasoline are estimated to have fallen 9.9% in the second quarter.  Consequently, Arkansas Taxable Sales Including Gasoline (ATSIG) fell even more sharply than ATS:  down 1.2% for the quarter.

Despite the weakness in the most recent data, relatively strong growth in the previous three quarters imply that both ATS and ATSIG are well above their year-ago levels.  From 2011:Q2 through 2012:Q2, ATS expanded by 4.8% and ATSIG was up by 4.2%. 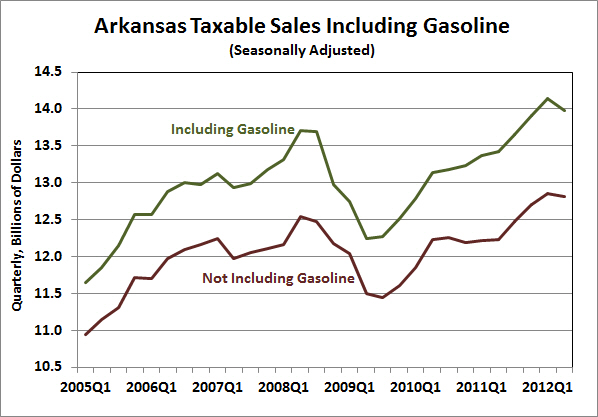 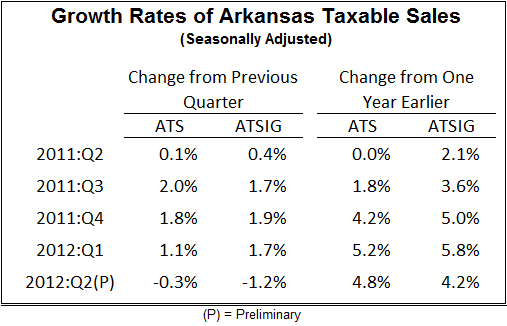 The second quarter weakness in taxable sales was due entirely to an apparent downturn in sales during the final month of the quarter.  Hence, it would be premature to be concerned about ongoing weakness.  Nevertheless, the second quarter downturn parallels a similar slowdown in national retail sales, suggesting that the Arkansas data may not simply be a statistical anomaly.  Preliminary data from the Census Bureau shows that U.S. Retail Sales were down nearly 0.4% in the second quarter, matching the approximate timing and magnitude of the weakness in Arkansas Taxable Sales. 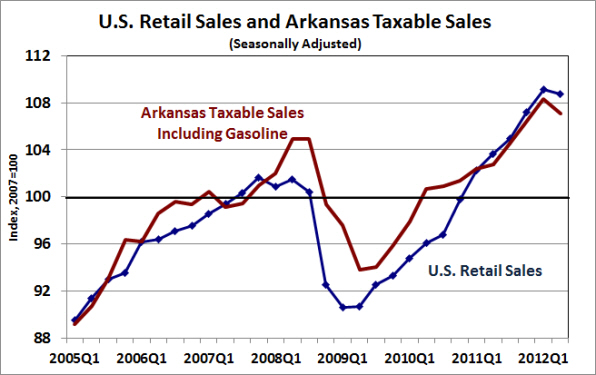 At this point, the second quarter data are preliminary.  Final figures on sales and use tax collections in July are not yet available, nor are the data for gasoline sales in June (the gasoline component of ATSIG in this preliminary report is includes June figures that are derived from model-based estimates).   The data will be updated here on the pages of the Arkansas Economist when final information is available.

* Data are preliminary until the release of the DFA report, Arkansas Fiscal Notes for July 2012, and will be updated when information becomes available.