September data from the Bureau of Labor Statistics reveals an unusual pattern of unemployment rate changes: While the statewide average declined 0.1 percentage points from August to September, metro area unemployment rates rose slightly (with the exception of Fort Smith, unchanged).  This might indicate an improvement in the non-metropolitan regions of the state, but is more likely an artifact of monthly “noise” in the data and/or differences in the state and metro seasonal adjustment methodologies.  Changes over the previous twelve months (not-seasonally adjusted data) are more consistent, with five metro areas matching or exceeding the 0.2 percentage point decline statewide.  Rates in Memphis and Texarkana were higher compared to a year ago.  In fact, Texarkana earned the dubious distinction of experiencing the largest year-over-year increase in the nation. 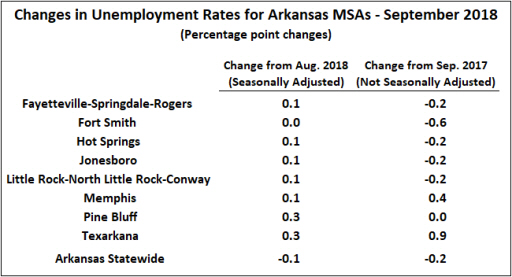 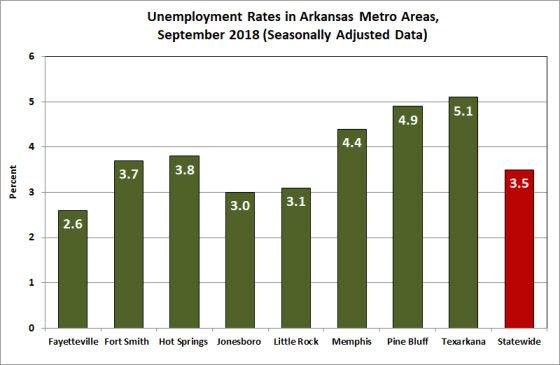 Payroll Employment
From August to September, nonfarm payroll employment rose sharply in Fayetteville, Hot Springs, Jonesboro, Little Rock, and Memphis.  Pine Bluff and Texarkana were unchanged, while Fort Smith suffered a 0.4% contraction.  Over the past twelve months, both Fort Smith and Pine Bluff have declined, and indeed, employment in both metros remain lower than the cyclical trough of February 2010. 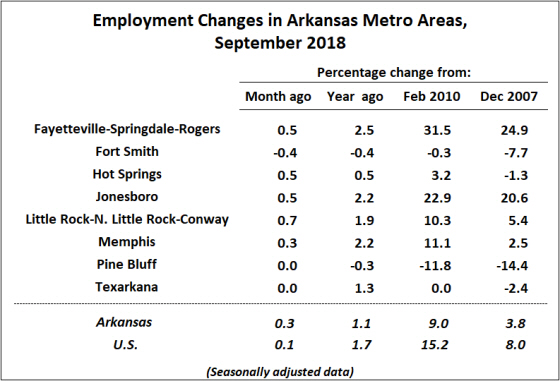 As shown in the final column of the table above and illustrated using quarterly averages in the chart below, only two metro areas have experienced robust employment growth over the past decade (Fayetteville and Jonesboro), while employment in Little Rock and Memphis is only slightly higher than at the previous cyclical peak.  Employment levels in Texarkana, Hot Springs and Fort Smith remain below pre-recession levels, as does Pine Bluff, which is down 15% from a decade ago. 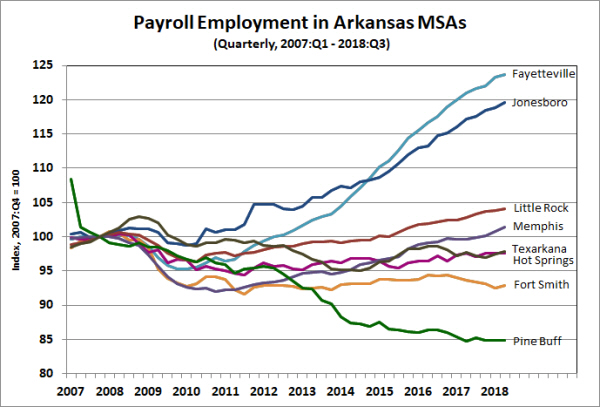