The Bureau of Economic Analysis announced this morning that the recent acceleration in national GDP growth was reflected second quarter statistics for the 50 states:  Growth rates ranged from 2.5% in Delaware to 6.0% in Texas.  Arkansas’ growth rate was 4.4% — the tenth-highest growth rate in the nation.  As part of a comprehensive revision of the state GDP data (more below), Arkansas first quarter growth rate was also revised up from 0.0% to 2.0%.  From 2017:Q2 to 2018:Q2, Arkansas GDP growth has been 1.7%, compared to 2.9% for the U.S. 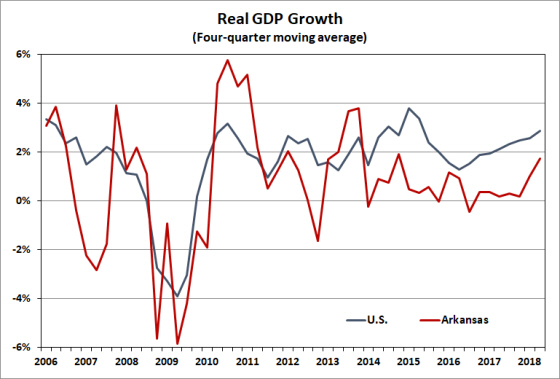 Agriculture was by far the largest contributor to Arkansas’ GDP growth, accounting for 1.27 percentage points of the state’s 4.4% growth rate.  Other sectors adding significantly to growth included Real estate, Information and Utilities.  Durable goods manufacturing was also a notable area of strength for both Arkansas and the U.S.  The only negative contributors to Arkansas growth were Finance and insurance, Retail trade and Nondurable goods manufacturing. 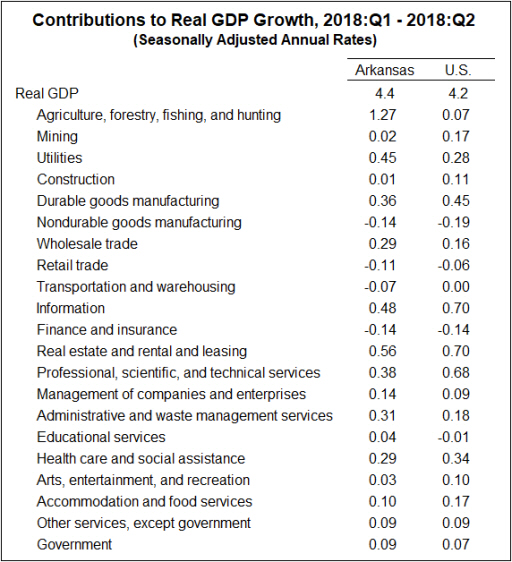 Comprehensive Data Revisions:
This morning’s data release incorporated the results of the BEA’s comprehensive update of GDP by state, incorporation more complete and detailed source data than was previously available.  The base year for price adjustment was also changed from 2009 to 2012.  For Arkansas, the revisions had the effect of lowering the level of GDP estimates for much of the past decade.  The revised data show a somewhat sharper downturn during the “Great Recession” of 2008-09, and also show sharply slower growth over the period 2013 through 2017.  From 2013:Q1 through 2017:Q4 the revised data show a growth rate of 0.5% compared to 1.0% in the previously published data (annual rates). 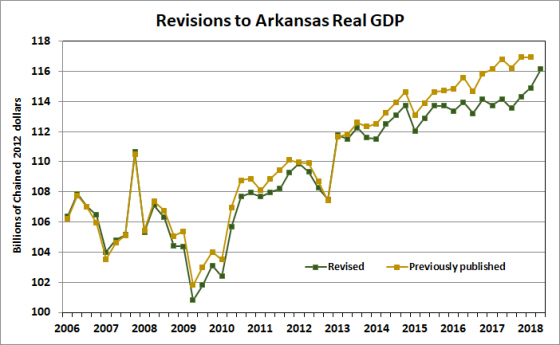 Source: Bureau of Economic Analysis. Note – Previously published data have been converted from the 2009 base year to the new benchmark of 2012.

For more recent periods, the data revisions mark something of an improvement.  Quarterly growth rates for Arkansas were revised up from 0.0% to 2.0% for the first quarter of 2018, and up from 2.5% to 2.7% for the fourth quarter of 2017. 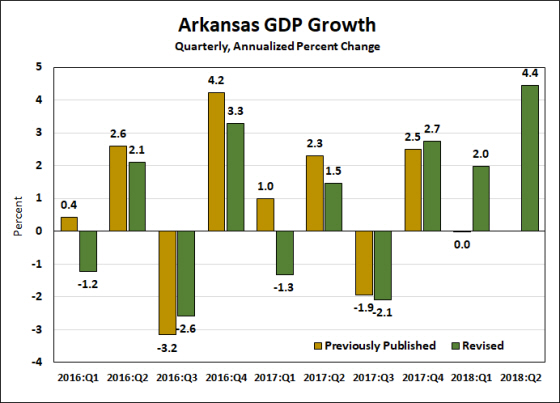 Although the newly-revised data give cause for reassessing the strength of Arkansas’ economic expansion over the past several years, the latest readings provide reason to be optimistic that the recent pick-up in GDP growth nationwide is also being enjoyed here in Arkansas.