Metro Area Employment and Unemployment – May 2019 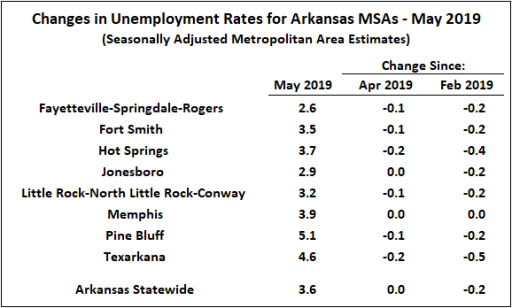 As shown in the figure below, recent declines have partly reflected a reversal of rate increases earlier in the year.  Nevertheless, unemployment remain are now at record lows in Fayetteville, Fort Smith, Hot Springs, Jonesboro, and Little Rock. 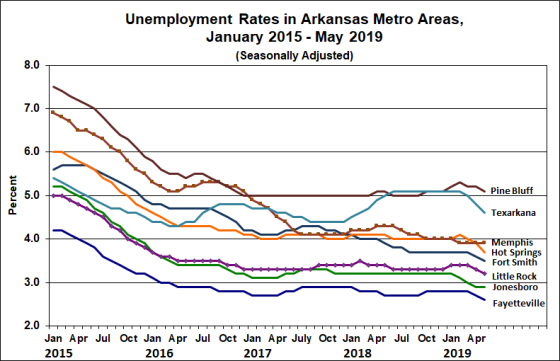 Payroll Employment
Monthly changes in nonfarm payroll employment were mixed in May.  Employment was up 0.3% in Hot Springs< Little Rock and Memphis, and down 0.3% in Pine Bluff.  Smaller increases were reported for Jonesboro, Little Rock, and Texarkana.  Over the past year, payroll employment growth has exceeded 1.0 percent in six of the state’s metro areas.  In Fort Smith, net employment growth has been essentially zero, while it is down 0.3% in Pine Bluff.    A similar pattern holds for longer-term trends as well: Since the current period of employment expansion began at the end of 2013, the only metro area that has continued to see negative job growth has been Pine Bluff. 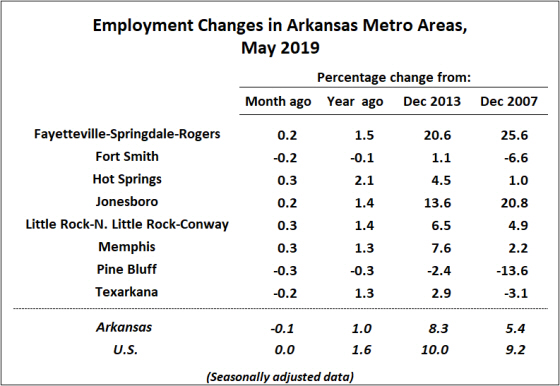