Arkansas total personal income increased at an annual rate of 1.8% in the first quarter, well below the national growth rate of 3.4%.  Arkansas’ growth for the quarter ranked it as the 6th slowest-growing state in the nation.   First-quarter growth represented a sharp slowdown from the fourth-quarter growth rate of 6.8% (which was revised downward from the originally-reported 7.5% rate).  Over the past four quarters, Arkansas personal income has expanded by 3.5%, compared to an average U.S. growth rate of 3.8%. 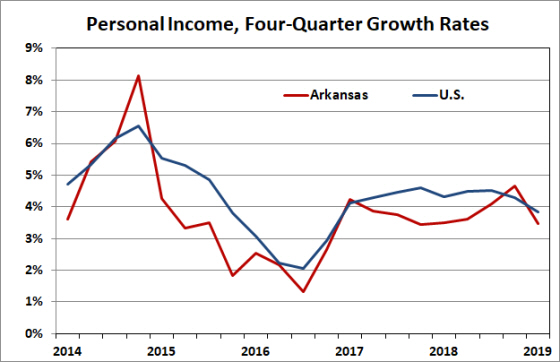 A number of the slowest-growing states in the first quarter were midwestern states which (like Arkansas) suffered a quarter-to-quarter decline in farm income.  Arkansas farm income declined by 19% in the first quarter (a 58% annualized rate), contributing a negative 1.6 percentage points to the overall growth in income.  In part, the declines in farm incomes in the mid-west and mid-south are related to a temporary boost in the fourth quarter of 2018 from payments made under USDA’s Market Facilitation Program, which was implemented to assist farmers affected by tariffs and reduced exports.  Payments under this program began in the fourth quarter and extended into the first quarter of 2019, but at a slower pace.  Looking past the volatile quarter-to-quarter fluctuations, Arkansas farm incomes in the first quarter were up 3.9% from the same time a year earlier.

As shown in the table below, the general decline in Farm Income was reflected in the earnings breakdown by a sharp decline in Farm Proprietors’ income.  Another component that contributed to slower growth in the first quarter was a decline in Dividends, Interest, and Rent.  Today’s report from the Bureau of Economic Analysis noted that this component declined in all 50 states in the first quarter, after a pronounced surge in the fourth quarter.  It is not uncommon to see year-end spikes in dividend income (followed by first-quarter declines), especially when end-of-year changes in the tax code provide incentives for front-loading payments.  In this case, however, we are aware of no specific tax law changes that would account for this particular pattern. 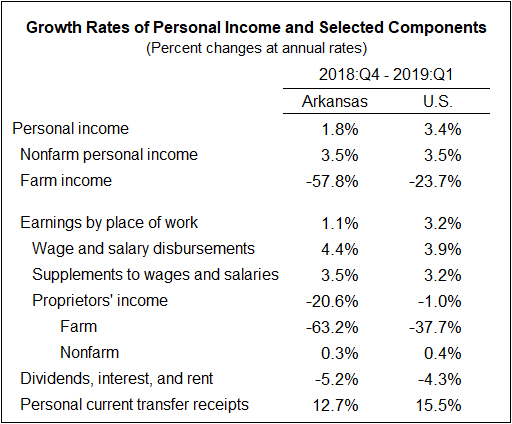 In contrast to the declines in Farm Income and Dividends, Interest, and Rent, Arkansas workers saw growth in wages, salaries and supplements that exceeded national growth rates.  Personal Current Transfer Receipts contributed to income growth on both the state and national levels.  According the the BEA, “The increase in transfer receipts was due to an increase in refundable tax credits (the child tax credit and the Affordable Care Act premium tax credit), and a 2.8 percent cost of living increase in Social Security benefits.”

A breakdown of earnings by industry shows some additional specific sources of income gains and losses.  For both the state and the nation, relatively strong earnings growth was seen in retail trade as well as other major service-providing sectors.  One area of relative strength for Arkansas was in manufacturing, where earnings growth contributed 0.24 percentage points to the state’s growth rate compared to only 0.03 percentage points for the U.S. 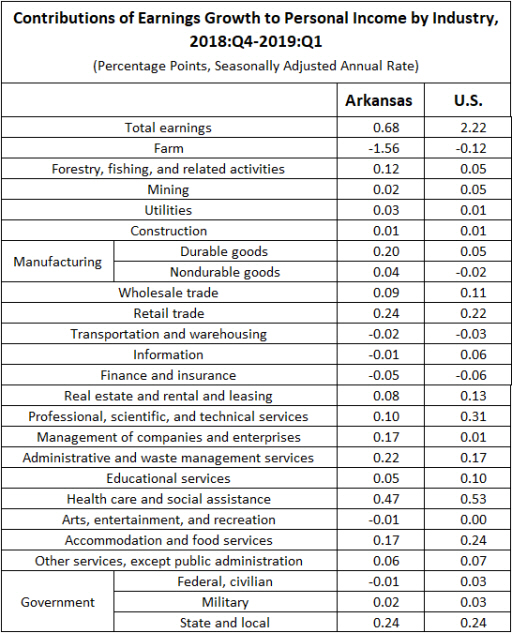