Arkansas Employment and Unemployment – May 2019 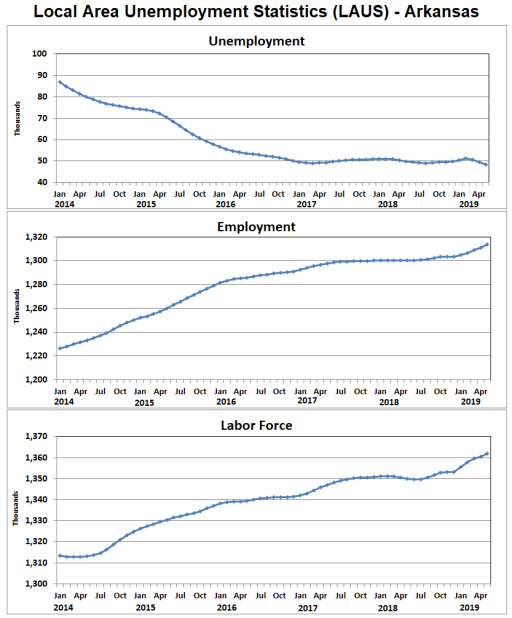 Payroll Employment
Nonfarm payroll employment declined by 700 jobs in May (seasonally adjusted).   Nationwide, payroll employment increased by a relatively small increment in May (+75,000) and today’s report on state-level employment notes that Washington was the only state to see significant job growth for the month, and that payroll employment was “essentially unchanged in 49 states and the District of Columbia.”

As shown in the table below, several sectors of the Arkansas economy showed job declines in May.  Employment in goods-producing sectors was particularly disappointing with declines in both Construction and Manufacturing.  Employment in retail trade outpaced the typical seasonal increase for May, while Leisure and Hospitality Services expanded by less than the usual seasonal gain (hence a decline in seasonally-adjusted employment).  Professional and Business Services showed an increase of about 1,000 jobs, with most of the increase attributable to Administrative and Support Services. 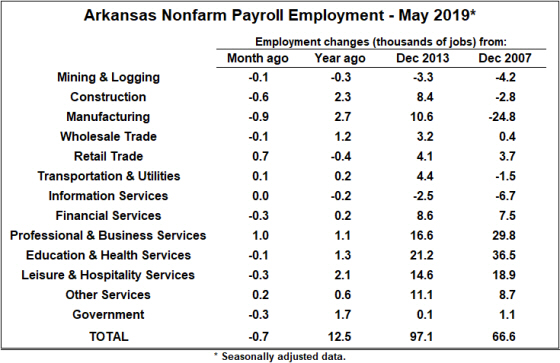 Compared to a year earlier, total payroll employment is up by 12,500 jobs.  About 40% of that job growth has come from Manufacturing and Construction.  Other important sectors for year-over-year growth include Wholesale Trade and most of the other Service-providing sectors (particularly Leisure & Hospitality).