Unemployment rates moved lower in most of Arkansas’ metro areas in April, augmenting declines from the previous month.  Rates were unchanged in Memphis and Pine Bluff, but declined in all other metro areas.  Compared to a year earlier, rates were lower in all eight metro areas, with declines ranging from -0.2 in Pine Bluff to -0.8 in Fort Smith. 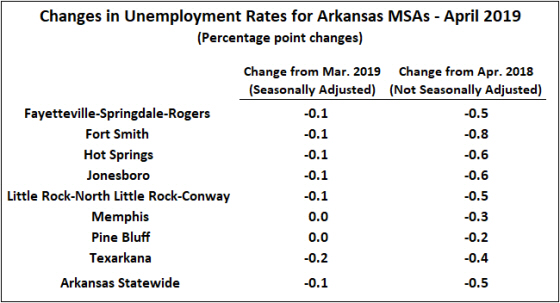 With recent declines, unemployment rates now range from a high of 5.2% in Pine Bluff to a low of 2.7% in the Fayetteville-Springdale-Rogers metropolitan area. 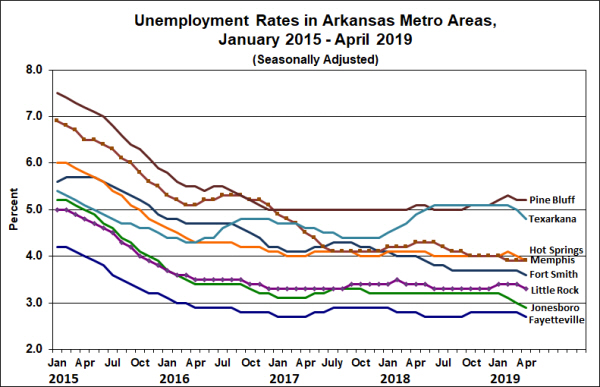 Payroll Employment
Nonfarm payroll employment changes were mixed in April.  Four metro areas saw increased from the previous month, but three experienced declines (with the largest being Pine Bluff, down 0.6%).  Employment was essentially unchanged in Memphis.  Over the past twelve months, employment has increased by more than 1.0% across most of the state, but has been flat in Fort Smith and Pine Bluff.

The table below presents a slightly modified view of payroll employment tracking that we have been following here on the Arkansas Economist:  Instead of measuring changes from the beginning of the current nationwide employment expansion (February 2010), the third column of the table reports cumulative employment growth since the present growth phase began in Arkansas, December 2013.*  Since that time, statewide employment growth has been a cumulative 8.3%.  Northwest Arkansas and Jonesboro are the only the two metro areas that have grown faster than the statewide average, but all of of Arkansas metro areas (except Pine Bluff) have experienced employment growth over the subsequent 5+ years. 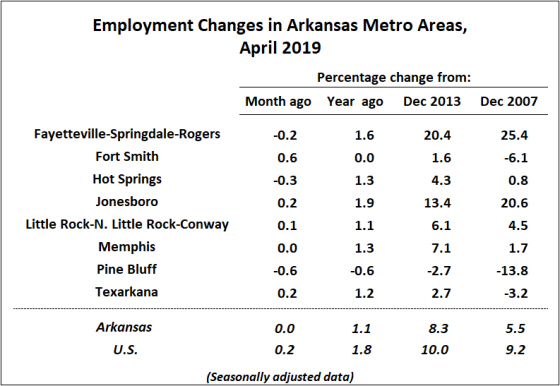 *The selection of December 2013 as the start of the present employment expansion is not rigorously scientific, but it is consistent with other business-cycle patterns.  GDP and income data suggest that Arkansas experienced a modest local recession in 2012, with negative employment growth through the end of 2013.  As shown in the figure below, employment began to expand during 2014 and has continued at a relatively steady pace since then. 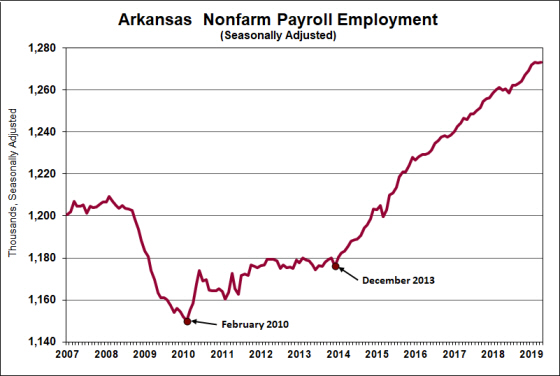