Metro Area Employment and Unemployment – May 2016 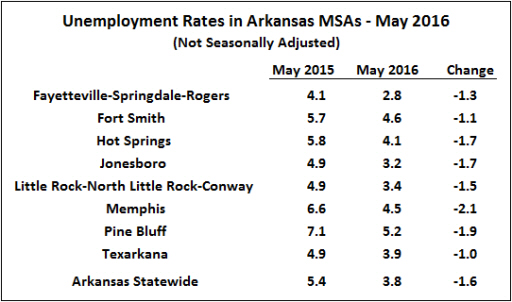 Changes in unemployment rates from April to May were dominated by seasonal movements.  The end of the school year is always associated with higher unemployment as teachers and students seek summer employment (among other factors).  After adjusting for this typical pattern, unemployment rates were little-changed around the state.  Rates ticked downward by one-tenth of a percent in three metro areas, increased by one-tenth in two, and were unchanged in three.

Payroll Survey
Changes in nonfarm payroll employment were mixed in May.  Monthly employment growth was relatively strong in Little Rock and Fayetteville, and was also positive in Fort Smith, Hot Springs and Jonesboro.  Payrolls declined in Memphis, Pine Bluff and Texarkana.  Over the past 12 months, Pine Bluff is the only Arkansas metro area to have experienced a decline in payroll employment.  Today’s news release from the Bureau of Labor Statistics (BLS) noted that payrolls were down from a year earlier in only 70 of the nations metro areas. 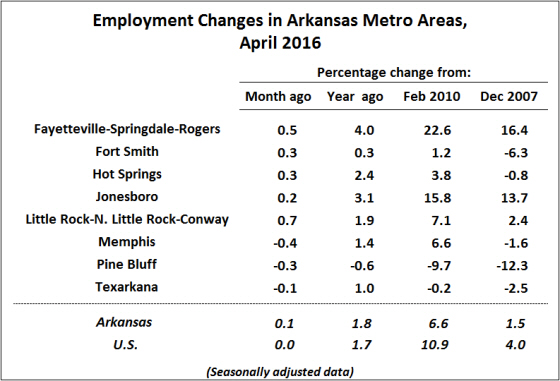 The two independent data sources reported by the BLS continue to provide conflicting information.  According to the household survey (on which unemployment rate estimates are based), employment has been expanding phenomenally around the state.  In contrast, employment growth measured by the payroll survey has been quite a bit lower.  For Memphis, Texarkana, and the statewide totals, the household survey is showing strong growth for 2016, while the payroll survey is showing employment declines.  The two sources of data differ in methodology and coverage, but it unusual for discrepancies of this magnitude to remain for any extended period of time. 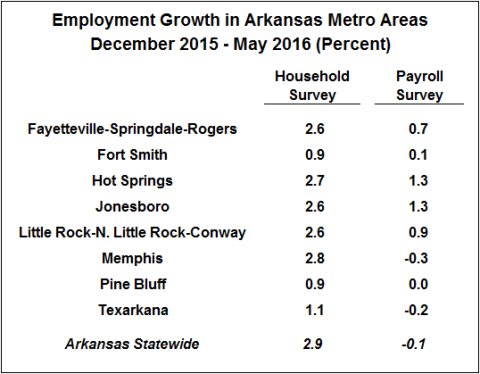