Arkansas personal income expanded 1.2% in the first quarter of 2016, outpacing the national average of 1.0%.  The highest growth rate in the nation was Washington state (1.5%), with Arkansas’ growth ranking the sixth-highest among the 50 states. 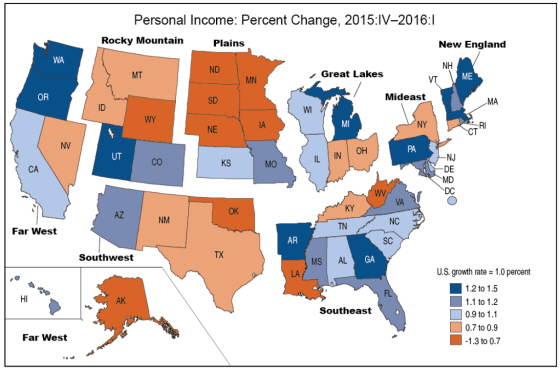 All major components of Personal Income showed positive growth in the first quarter, led by a 17.1% increase in Farm proprietors’ income.  Wages and salaries grew at a 1.4% pace, while Dividends, interest and rent expanded by only 0.3%.

Total earnings expanded 1.7% — a higher growth rate than any other state except Washington.  The table below shows the growth rates of total earnings by industry, showing that  Arkansas’ strong performance was largely attributable to the gain in Farm income.   Mining (including oil and natural gas extraction) was the weakest sector for both Arkansas and the total U.S.  The news release from the Bureau of Economic Analysis noted that mining income had experienced its 5th consecutive quarterly decline, falling 15.8% nationally since the fourth quarter of 2014.  Over the same period, mining income in Arkansas contracted by 17.4%.  Arkansas’ growth outpaced the nations in most sectors, particularly in service-providing sectors.  However, earnings in durable goods manufacturing declined slightly in Arkansas, in contrast to a small gain nationwide. 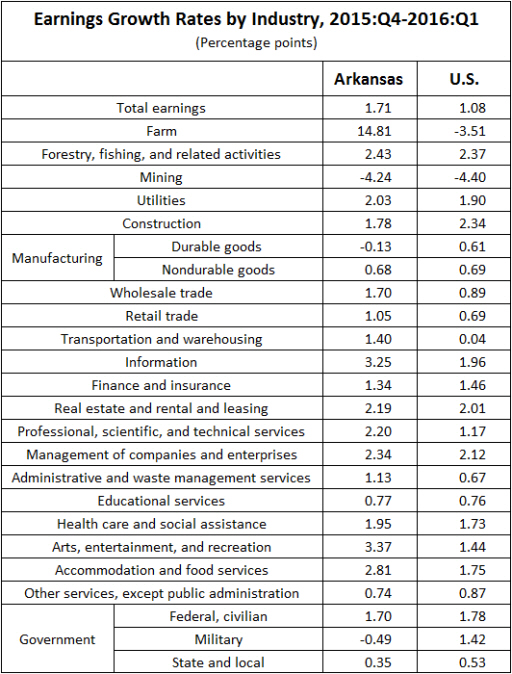