Sales Taxes Across the Nation

The Tax Foundation has released an updated list of state and local sales tax rates across the nation, accounting for changes in tax rates that took effect July 1 (the beginning of the fiscal year for most states).  Including both statewide and local sales taxes, Arkansas ranks near the top of the list for the highest rates in the nation.  Compared to the other 49 states plus the District of Columbia, the updated report shows Arkansas’ ranking dropping from #2 to #3 — not because of changes in Arkansas tax rates, but because a statewide tax increase in Louisiana catapulted that state from #3 to #1.

The statistics from the Tax Foundation are based on the sum of statewide tax rates plus a population-weighted measure of local tax rates.  In Arkansas, the state sales tax is 6.5% — tied for the 9th highest in the nation.*  The average local tax rate (weighted by population) is 2.8% — making the combined state/local tax rate 9.3%.  Only Louisiana (9.98%) and  Tennessee (9.45%) have higher combined sales tax rates. 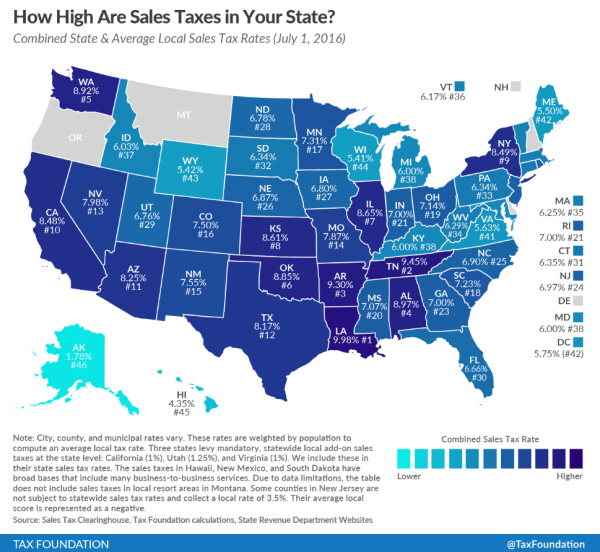 The Tax Foundation figures do not incorporate exemptions for some categories of goods.  For example, in Arkansas and in other states the sales tax on groceries is lower than on other items.  The statistics also do not include additional sales taxes that are imposed on specific goods and services.  For example, several cities impose special taxes on prepared foods (the “hamburger tax”).  Moreover, the Tax Foundation statistics do not include excise taxes that are imposed at the wholesale level and therefore incorporated into retail prices.

Although the aggregate state/local sales tax rate for Arkansas did not change in the latest report from the Tax Foundation, tax rates in several local jurisdictions changed as of July 1.  The list of changes and resulting local tax rates is as follows: