The Bureau of Labor Statistics released new data on metro area employment and unemployment this week, including the long-awaited revisions of the unemployment data.  For Arkansas metro areas, the revisions mirrored the statewide revisions that were released in late February:  Unemployment rates were revised lower for late 2016 and into early 2017, revised higher for much of the remainder of 2017, ending the calendar-year 2017 at about the same place as the originally published figures [see figure]. 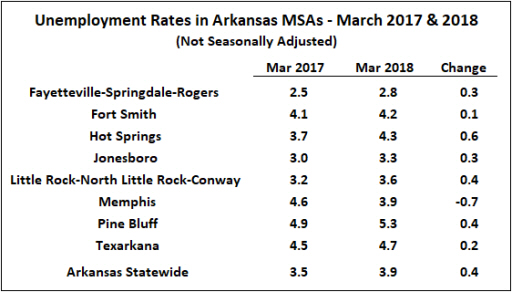 Seasonally adjusted unemployment rates edged up slightly from February to March.  Rates were up 0.1 percentage point in Fayetteville, Fort Smith, Jonesboro and Little Rock.  Larger increases were registered in Hot Springs, Pine Bluff and Texarkana.  The unemployment rate in Memphis was unchanged. 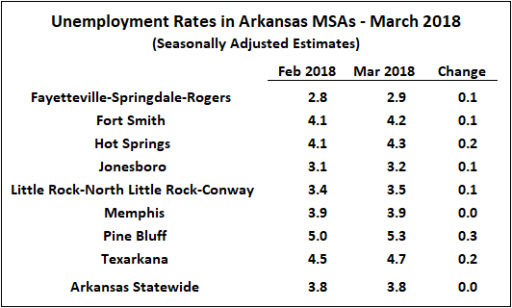 The figure below shows the paths of unemployment rates from January 2015 through March 2018.  Although rates have tended to moves slightly higher in recent months, they have generally remained little changed after falling near their current levels in early 2016. 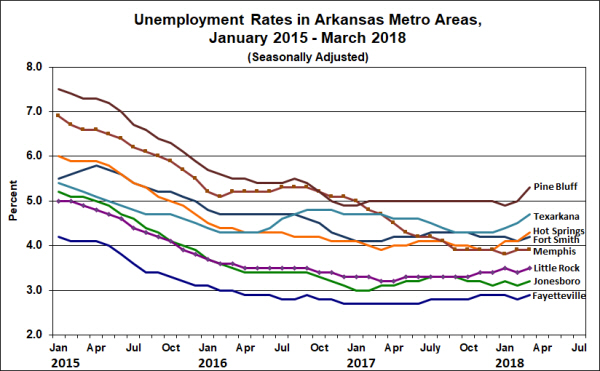 Payroll Employment
Nonfarm payroll employment increased statewide from February to March, but declined in Hot Springs, Pine Bluff, and Texarkana.  Compared to a year earlier, payroll employment is up about 2% in Northwest Arkansas, Jonesboro and Memphis.  Employment in Central Arkansas is up 1.4%.  Other parts of the state have seen slower growth:  employment levels in Pine Bluff and Texarkana are essentially unchanged from a year earlier, while Fort Smith and Hot Springs have experienced declines. 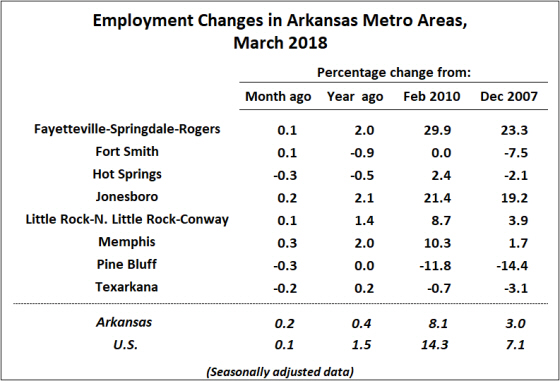 The figure below illustrates the paths of nonfarm payroll employment since 2007 (quarterly averages).  Both the Northeast and Northwest regions of the state have experienced consistent growth since the end of the “Great Recession” and the Little Rock metro area reached net positive territory in 2015.   Employment in other Arkansas metro areas — including Hot Springs, Texarkana, Fort Smith and Pine Bluff — remain below their levels of a decade earlier. 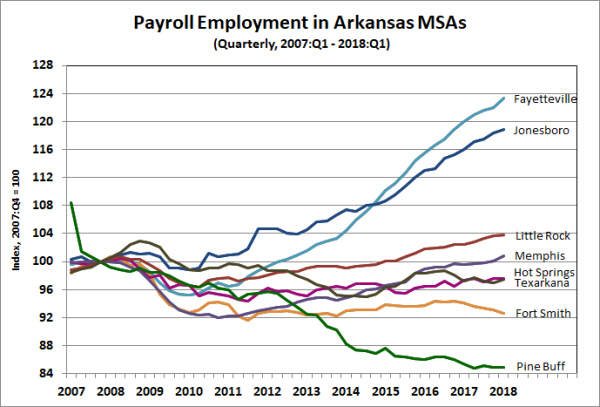