In the latest report on state-level GDP, Arkansas registered an increase of 2.5% (seasonally adjusted annual rate).  The fourth quarter increase was slightly lower than the comparable national-average figure of 2.7%, and ranked #26 among the 50 states.  The Bureau of Economic Analysis reported that some of the key contributors to GDP growth in the fourth quarter were mining and construction (particularly in the Texas, the fastest-growing state); as well as durable goods manufacturing and professional, scientific and technical services.  On the other hand, agriculture, forestry, fishing, and hunting decreased for the fifth consecutive quarter, dampening growth in the Plains states in particular. 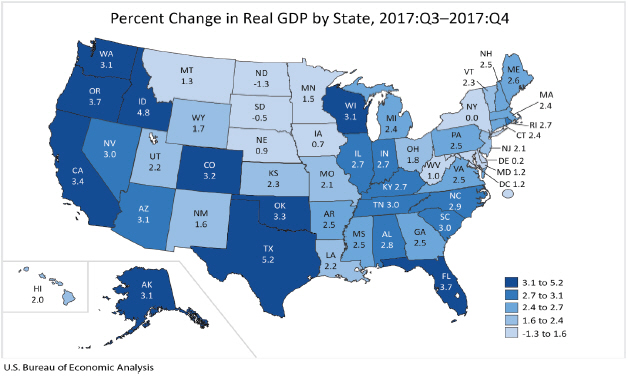 As shown in the table below, many of the sectors that showed notable growth nationwide also contributed to Arkansas’ overall growth rate.  In addition, nondurable goods manufacturing played a role in boosting Arkansas’ relative growth and agriculture, etc., made a positive contribution. 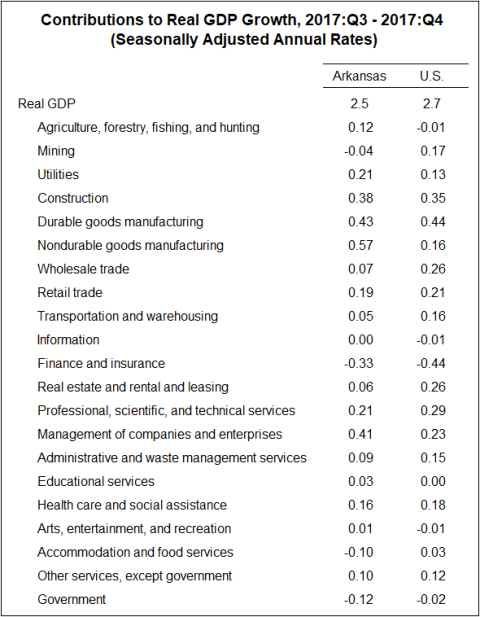 Data Revisions
Today’s release also included revisions to previously published data for 2014:Q1 to 2017:Q3.  The newly updates, which incorporate new and revised source data, resulted in a considerable reduction in Arkansas’ reported growth over the past year.