The Arkansas Realtors® Association released new home sales figures for February and March this week.  February’s sales total was up 9.1% over the previous year, but March’s figure was 3.4% lower than in 2017.   Although the March statistics might appear to represent a sharp slowdown, monthly ups and downs can be deceptively volatile–particularly in comparison to previous-year figures.  As shown in the figure below, home sales exhibited an uncharacteristic surge in March 2017–up more than 16% from 2016.  This surge was followed by an atypical seasonal dip in April.  So when it comes to measuring year-over-year growth in March 2018, we’re beginning from an unusually high base.  The March 2017 surge and subsequent slowdown in April has two implications:  (1.) it is likely that some of the strength in March 2017 was the result of accelerated closing dates that “stole” growth from April, and (2.) growth in home sales in April 2018 is likely to look fairly strong, being measured from an unusually low base period in 2017. 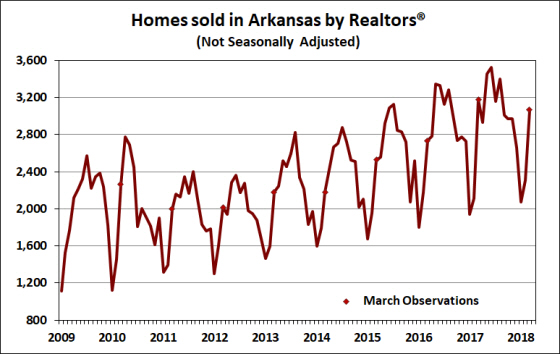 As a way of adjusting for some of the month-to-month variability in not-seasonally adjusted data, the figure below shows quarterly totals that have been adjusted for seasonal variation.  With these modifications, the upward trend in home sales from 2013 through 2017 is evident.  Although home sales in 2018:Q1 proceeded at a slower seasonally-adjusted rate than the previous quarter, they were higher than in the first quarter of 2017.  The cumulative year-to-date figures provided by the ARA indicate that first quarter sales were up 2.3% from the previous year. 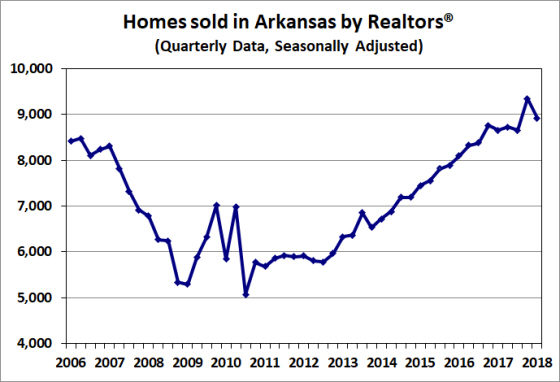 The pace of home sales is now well beyond the peak recorded prior to the housing “meltdown” of 2007, but there is still room for further expansion.  As long as mortgage rates do not rise too quickly, we are expecting continued growth in home sales over the remainder of the year.  In fact, increases in mortgage rates might provide a temporary boost to home sales as prospective buyers rush to get in on the relatively low rates.  Higher borrowing costs are expected to contribute to somewhat lower home sales in the future, but perhaps not until 2019.