The latest data on state-level employment and unemployment continue to suggest slowing job growth in Arkansas.

The unemployment rate was unchanged from March at 3.8% — up 0.2 percentage points from a year ago.  In the household survey, the number of employed was down for the seventh consecutive month and the number of employed was up for the fifth month in a row.  The changes are small (and not statistically significant), but they suggest a clear slowdown in labor market growth compared to a year ago. 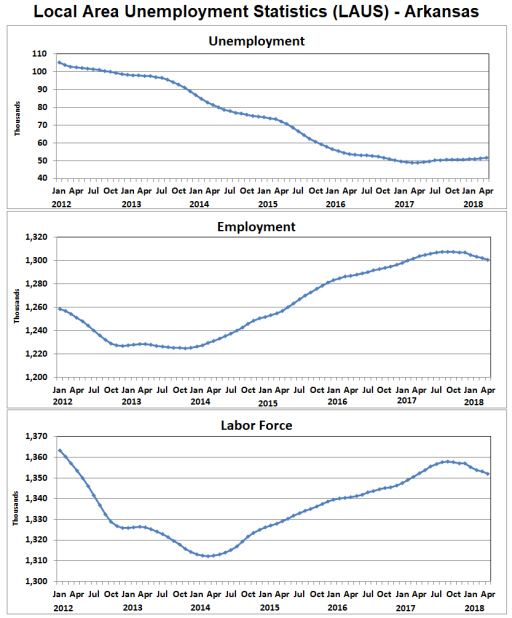 Payroll Employment
Nonfarm payroll employment declined by 1,500 March to April (seasonally adjusted).  The number of employed in both the Retail Trade and Leisure & Hospitality sectors was up in April, but the increases were not as large as typically expected for a March-to-April change.  Consequently, on a seasonally-adjusted basis, employment in those two sectors led the list of seasonally-adjusted job losers for the month.  Sectors adding jobs included Professional & Business Services, Other Services, and Manufacturing.  Over the past 12 months, Professional and Business Services and Manufacturing have been leading the way on job growth.  In Manufacturing, the employment gains have come from both durable and nondurable goods sectors. 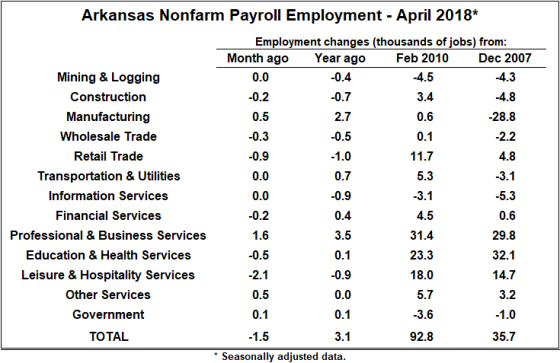 As illustrated in the figure below, both sources of employment data for Arkansas are indicating a growth slowdown compared to the trends of 2014-2016.  With unemployment remaining at the historically low rate of 3.8 percent, it is perhaps not surprising that ongoing job growth is experiencing a slowdown.  But while the pace of employment expansion is slowing, there is no indication of a significant contraction.  Rather, it appears that employment in some service-providing sectors is stabilizing after a period of relatively rapid growth. 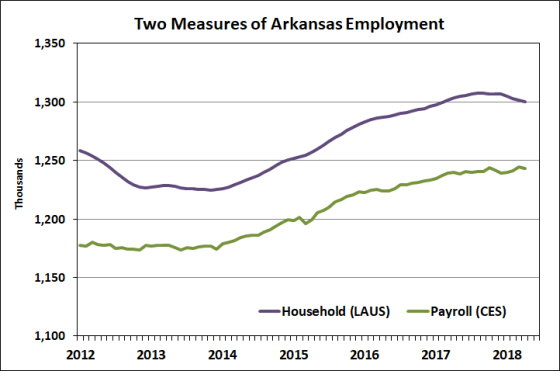