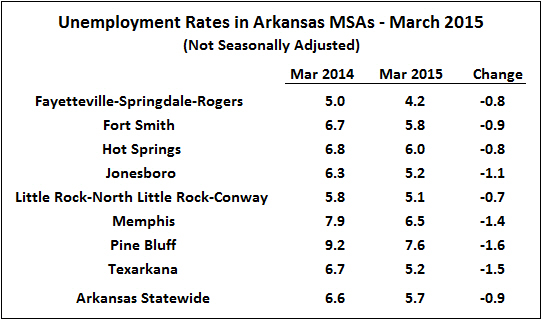 The data are  now fully revised to reflect new estimation methodologies and data sources, as well as changes in the definitions of metropolitan areas.  However, smoothed seasonally adjusted estimates have not yet been updated, so meaningful month-to-month comparisons are not possible.

Payroll Employment
The previously-reported statewide payroll data showed a sharp decline for Arkansas in March.  Although the drop-off appears to be largely weather-related, payroll employment declines were also prevalent across the state’s metro areas.   Employment declined in 6 of the 8 metro areas that include parts of Arkansas, was unchanged in Texarkana, and was up only slightly in Little Rock.  Compared to the previous year, employment has increased in 6 metro areas but is lower in Fort Smith and Pine Bluff. 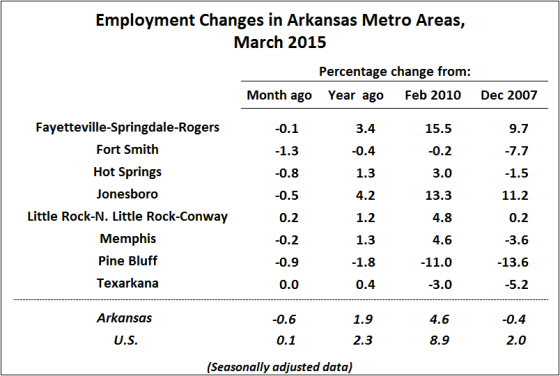 The chart below illustrates the divergent patterns of employment growth across the state’s metro areas.  Compared to the fourth quarter of 2007 (before the onset of the 2008-09 recession), employment is up nearly 12% in Jonesboro and 9.5% in Northwest Arkansas.  In the Little Rock metro area, employment has now slightly exceeded it’s pre-recession level.  Hot Springs, Memphis and Fort Smith have shown employment gains over the past three years, but remain below pre-recession peaks.  Employment has continued to follow a downward trend in both Pine Bluff and Texarkana.*  Payroll employment in Pine Bluff is down 13.2% compared to the fourth quarter of 2007. 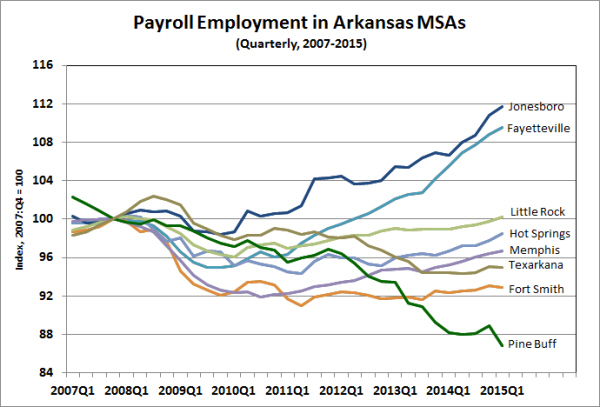