The latest employment report from the U.S. Bureau of Labor Statistics and Arkansas Department of Workforce services shows a slight weakening of labor market conditions during March.  Nevertheless, the trends remain positive and March appears to be a weather-related anomaly.

The unemployment rate in Arkansas remained at 5.6% after being revised upward from 5.5% to 5.6% for February.  Nationwide, the unemployment rate was unchanged at 5.5%.   The number of unemployed Arkansans increased by 777, the first monthly increase since February 2011.  On the other hand, the number of employed was up by 3,890 and the labor force increased 4,667.  This was the 17th consecutive monthly increase in household employment, and the 11th consecutive month of labor force expansion. 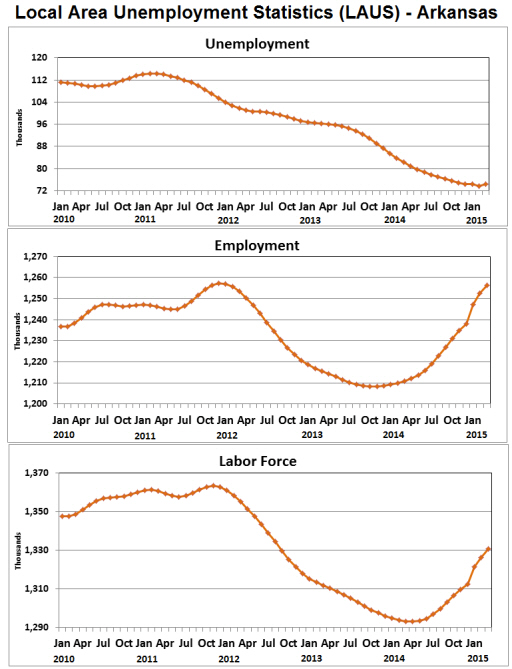 Payroll Survey
Data from the Nonfarm payroll survey showed a contraction of jobs in March, with employment down 6,700 after a downward revision of 1,400 to the February total.  As shown in the table below, the bulk of the job losses were in construction.  According to the news release from the Arkansas Department of Workforce Services, the decline in construction took place “as many projects were temporarily shut down due to weather conditions.”  Indeed the National Weather service reported that “It was a near record wet March, with a snowstorm to start the month and severe weather picking up toward the end.

In addition to construction, employment in Retail Trade was also down on a seasonally adjusted basis, reflecting a slower-than-usual start to the spring shopping season.  Notable monthly declines also appeared in the employment data for Professional & Business Services and Leisure & Hospitality Services.  Compared to a year ago, however, employment is up in every major sector except mining and logging, with a total employment increase of 22,200 (1.9%). 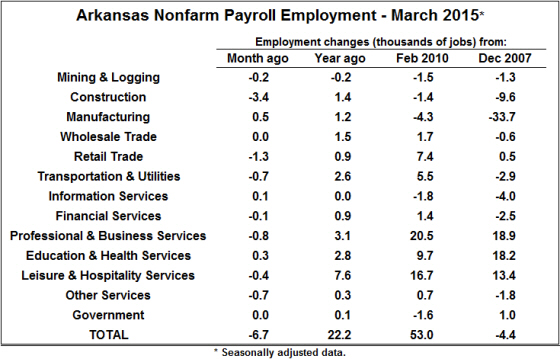 With the March decline, Arkansas payroll employment dropped back below it’s pre-recession level, after having slightly exceeded that level in February. 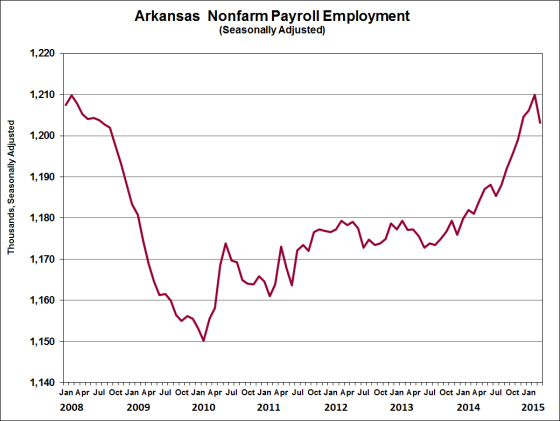