New data on metro area employment and unemployment came out this morning.  As we reported last month, the metro area data are being revised significantly, taking into account new methodology and source information, as well as new definitions for many of the metro areas themselves.  Final revisions will not come out until April 21, so the current data remain “provisional.”

The news release from the Bureau of Labor Statistics reported that “unemployment rates were lower in February than a year earlier in 366 of the 387 metropolitan areas.”  All eight of the metro areas that include parts of Arkansas were included in that total.  As shown in the table below, the unemployment rate has fallen by over a full percentage point in every metro area except Fayetteville-Springdale-Rogers.  The largest decline has taken place in Pine Bluff — down from 9.6 a year ago to 7.9 in February 2015. 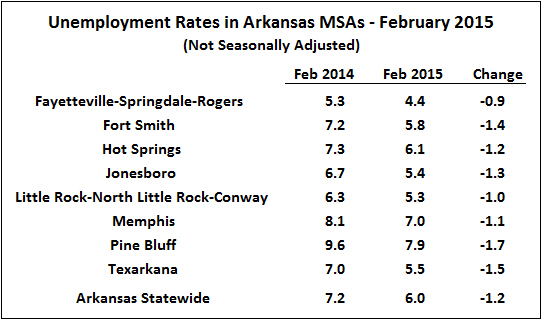 Payroll Data
Nonfarm payroll employment was up by 0.4% in Arkansas for the month of February, but the gains were not evenly dispersed across the state.  Four metro areas saw increases, while four saw decreases.  Compared to the previous February, however, seven of the state’s eight metro areas have seen increases in payroll employment, with only Pine Bluff continuing to see a downward drift.  Compared to the national employment trough of February 2010, only Pine Bluff and Texarkana have experienced net decreases.  Three metro areas now have higher levels of employment than before the 2008-09 recession, Fayetteville, Jonesboro, and Little Rock. 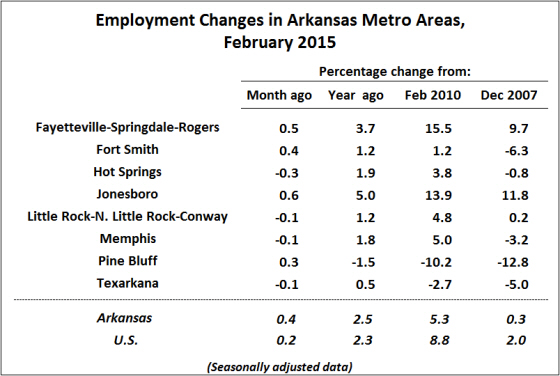 (Note:  With the redefinition of the Texarkana MSA, seasonal adjustment factors have been deemed unreliable for now and no seasonally-adjusted data released by the Bureau of Labor Statistics.  The data for Texarkana in the table above have been seasonally adjusted by the Institute for Economic Advancement.)