Unemployment rates in Arkansas metro areas were basically unchanged from May to June (seasonally adjusted), but were higher than a year ago in four of the eight metro areas.  First, the not-seasonally adjusted figures shown in the table below reveal that unemployment rates have increased over the past 12 months in Fort Smith, Memphis, Pine Bluff, and Texarkana.  Rates were unchanged in Hot Springs and Jonesboro, and have fallen slightly in Fayetteville and Little Rock. 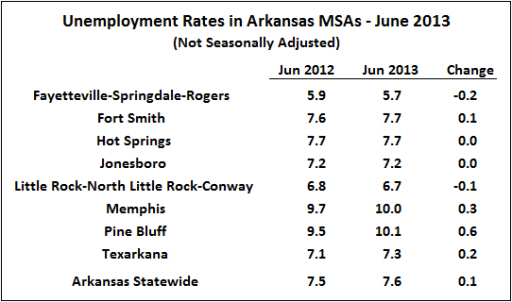 To evaluate monthly changes, the second table shows smoothed seasonally adjusted estimates of metro area unemployment rates.  From May to June, rates were unchanged in all metro areas except Pine Bluff, which showed an uptick of 0.1 percentage points. 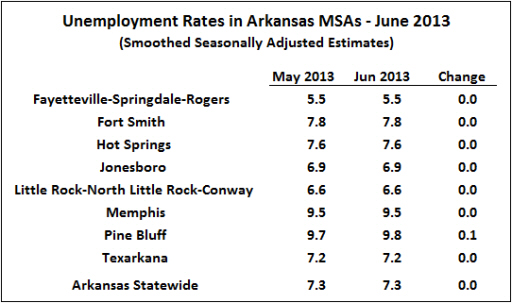 Payroll Employment
The payroll employment survey for June showed modest declines in Hot Springs and Pine Bluff, no change in Texarkana, and increases in the rest of the state’s metro areas.  The largest percentage increase for the month was in Fort Smith, up 0.8%.  Compared to June 2013, payroll employment has declined in Hot Springs, Pine Bluff and Texarkana, but is up in the remaining MSAs.  The monthly increase in Little Rock was large enough to push employment above its level in December 2007 — prior to the onset of the 2008-09 — for the first time since the recovery began. 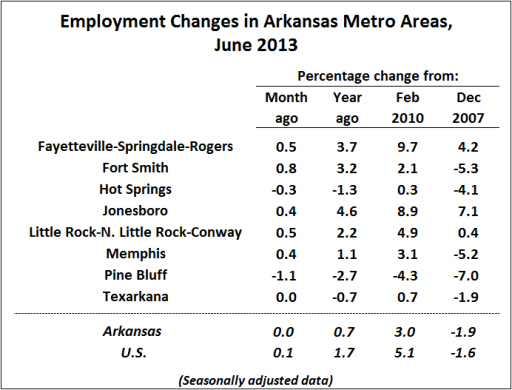