Late last week, the Arkansas Realtors® Association (ARA) released data for home sales in June.*  As shown in Figure 1, June sales dipped slightly from the relatively high level of the previous month, but sales in both May and June exceeded the peak months of 2011 and 2012.  June sales were 4.0% above the level of a year earlier.  For the year to date, home sales are running 8.9% higher than in 2012. 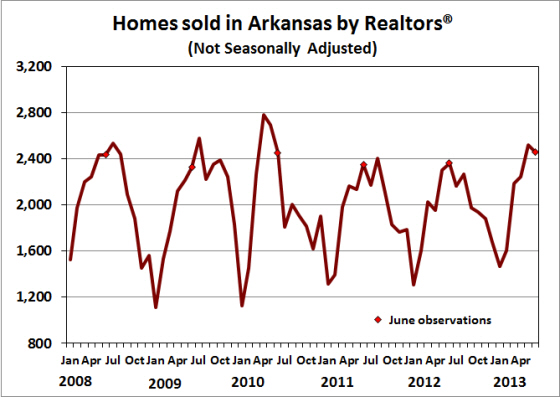 The 2013 recovery of home sales from a flat pace in 2011 and 2012 is more apparent after adjusting for recurring seasonal patterns in the data.  As shown in Figure 2, seasonally-adjusted home sales surged in response to two rounds of Federal home-buyer tax credit programs in 2009 and 2010, but suffered a sharp downturn in the months immediately following those incentive programs.  For the next two years, home sales showed little if any upward momentum.  Sales have been rising since about the beginning of this year. 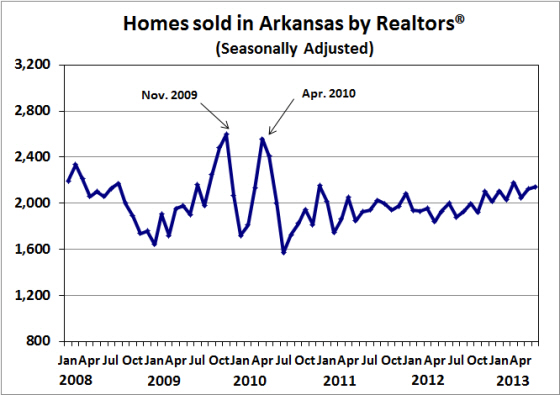 The upturn in sales during 2013 is even more evident after smoothing out the monthly ups and downs by using quarterly sales totals, as shown in Figure 3. 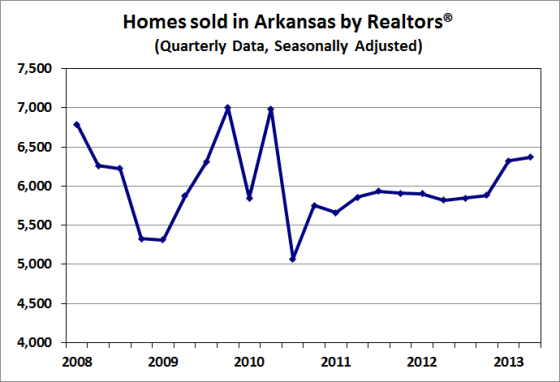 *The news release from ARA noted that “All 2013 reports have been updated to reflect more accurate numbers for Clark County… January 2012 through June 2012 reports have also been updated. The remaining 2012 reports will be updated each month as the 2013 reports become available.”  A comparison of the revised reports with the previously published data showed that sales information for Johnson County for 2013 was also updated.

The partial nature of the revisions present some conceptual problems for interpreting the existing time-series data.  However, the magnitude of the Clark County revisions for the first six months of 2012 are relatively small:  With an average revision less than 6 home sales per month, the changes are quantitatively insignificant.