Unemployment rates in the state’s metro areas showed mixed changes in July.  On a year-over-year basis, all eight of the metro areas covering parts of Arkansas showed declines.  The largest declines over the past 12 months occurred in Pine Bluff (-1.6%), Hot Springs (-1.5%), and Jonesboro (-1.4%). 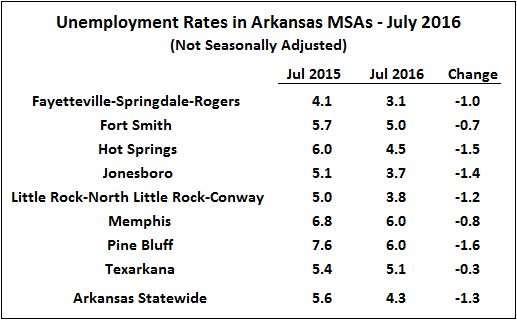 Seasonally adjusted data shows that changes from June to July varied from -0.3 percent in Pine bluff to +0.2% in Texarkana.  Unemployment rates ticked up in Memphis and ticked down in Fayetteville and Hot Springs.  Rates were unchanged in Fort Smith, Jonesboro and Little Rock. 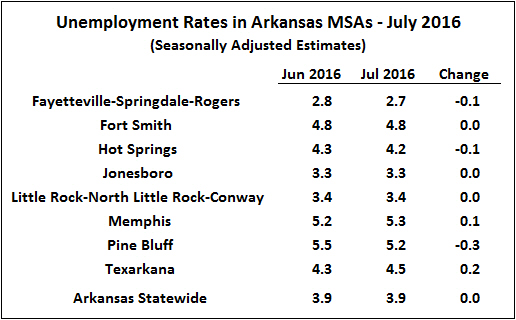 Unemployment rates are below the statewide average of 3.9% in Fayetteville, Jonesboro and Little Rock.  The latest decline in Pine Bluff knocked that metro area out of the unenviable position of having the highest unemployment rate in the state, with that dubious honor now belonging to the Memphis metro area (which includes only one county in Arkansas). 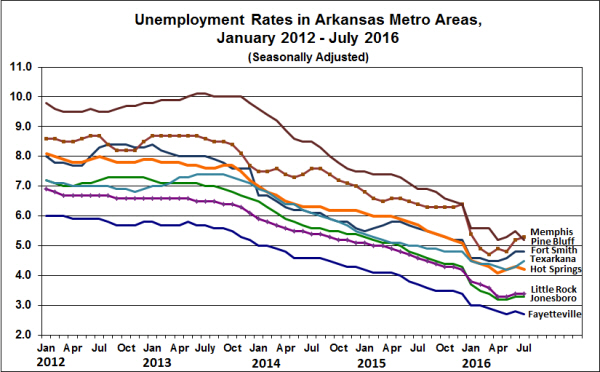 Payroll Employment
The data on nonfarm payroll employment showed that the two fastest-growing metro areas continued to surge, with Fayetteville up 0.6% and Jonesboro up 0.7%.   Compared to a year ago, both the Northwest and Northeast corners of the state have seen employment gains in the neighborhood of 4%.  In contrast employment declined from June to July in Hot Springs, little Rock, Memphis, Pine Bluff, and Texarkana.  Only two metro areas had employment lower than a year earlier:  Pine Bluff and Texarkana. 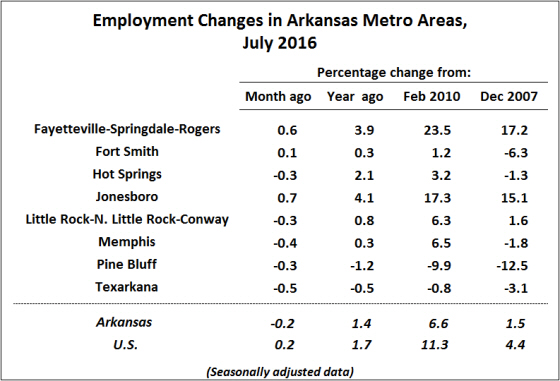