The most recent data from the Federal Housing Finance Agency (FHFA) show that house prices in Arkansas continue to rise, albeit not as rapidly as the nationwide average. According to the FHFA’s Expanded-Data Indexes, house prices edged only slightly higher in the second quarter of 2016 (+0.02%) but are up by 3.3% compared to a year earlier.  The data for the U.S. showed a quarterly increase of 1.3%, with a cumulative increase of 3.8% from 2015:Q2.  Since house prices bottomed-out in 2011:Q2, prices in Arkansas have risen 16.1%, compared to a 30.3% increase nationwide.  House prices in Arkansas are now slightly higher than before the housing-market crash of early 2007, but remain more than 3% below that baseline for the U.S. 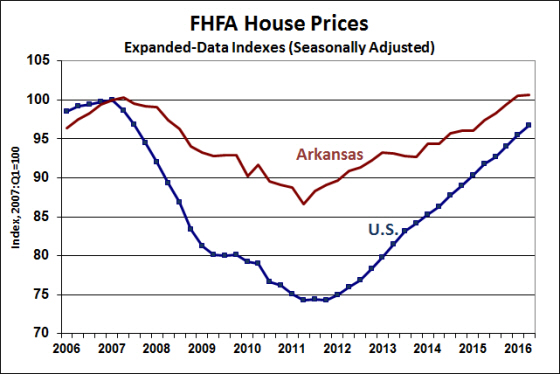 Using the slightly less comprehensive All-Transactions Indexes we can see that house prices rose in most areas of the state during the second quarter, with the exception being Hot Springs, where prices declined by 1.2%.  The largest quarterly increase was in Texarkana, where house prices were up by 5.5%. 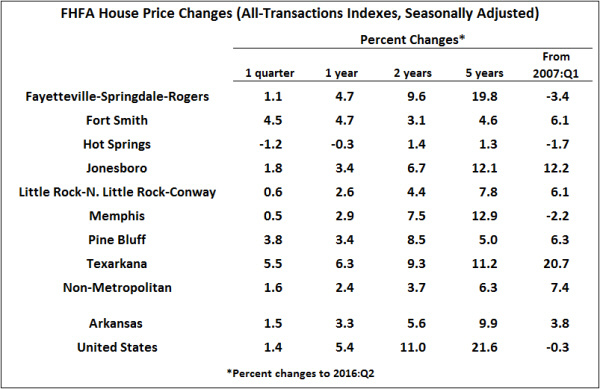 Since prices began rising five years ago, the markets that saw the largest declines between 2007:Q1 and 2011:Q2 have shown substantial recoveries:  In particular, the 5-year price increase in Northwest Arkansas has been 19.8%.  Nevertheless, house prices remain below their 2007 peaks in in Northwest Arkansas, as well as in Memphis and Hot Springs.  After the large increase in 2016:Q2, house prices in Texarkana are now more than 20% higher than the nationwide house-price collapse.  Note, however, that prices in Texarkana showed no significant decline in the post-2007 downturn. 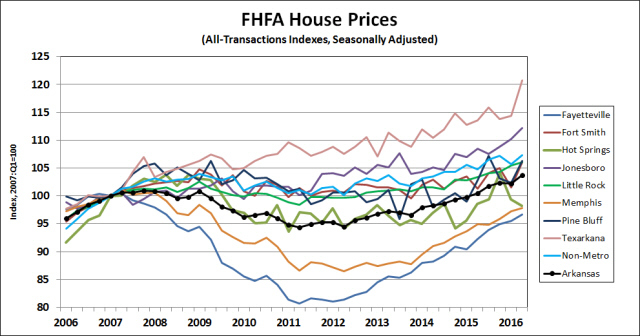 Given the vigorous demand for housing that is evident in home sales data, continued upward pressure on house prices is expected to continue.