Unemployment rates in the state’s metro areas showed some improvement in July.  Compared to the previous year, not seasonally-adjusted data showed lower unemployment rates in six of the eight Metropolitan Statistical Areas (MSAs) that cover parts of Arkansas.  The largest decline was in Fort Smith (-0.8%).  The unemployment rate was unchanged in Memphis, and was up by 0.3% in Pine Bluff. 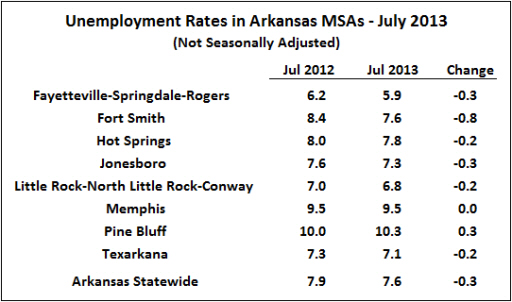 Smoothed seasonally adjusted estimates of unemployment rates also showed declines from June to July.  The unemployment rate in Hot Springs was unchanged, but each of the other Arkansas MSAs ticked downward.  The rate in Texarkana dropped by two-tenths. 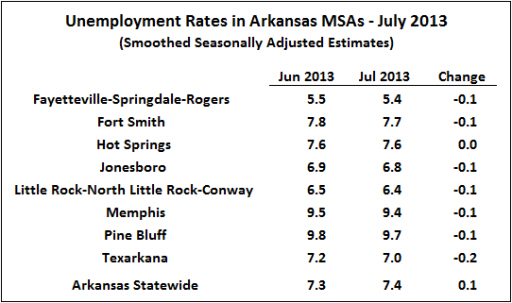 Payroll Employment
Data on nonfarm payroll employment were mixed.  From June to July, employment rose sharply in Fayetteville and Texarkana.  Hot Springs and Jonesboro also showed increases.  Employment was unchanged in Little Rock, but declined in Fort Smith, Pine Bluff and Memphis.  Six of the eight MSAs have shown positive employment growth over the past year, and all but Pine Bluff shown net increases since the national and statewide employment trough of February 2010.  Employment is now higher than pre-recession levels (December 2007) in four of the eight MSAs. 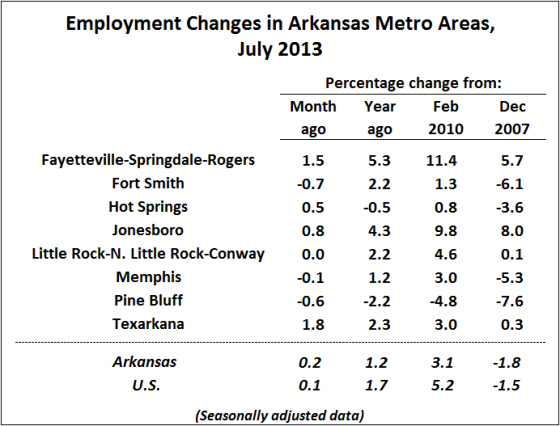