The latest data from the Arkansas Realtors® Association (ARA) confirms that the long-awaited recovery in home sales is underway.  Earlier this week, the ARA reported that sales of new and existing homes in July were up 19.1% from July of 2012.  As shown in the chart below, this year-over-year comparison overstates the trend rate of growth — but not by much.  Among the peak summer months of May, June, and July, last year’s July sales were relatively weak while this year’s sales show a July peak.  Nevertheless, the year-over-year increase for a three-month average was 10.8%.  For the year to date, the ARA data show a 10.7% increase. 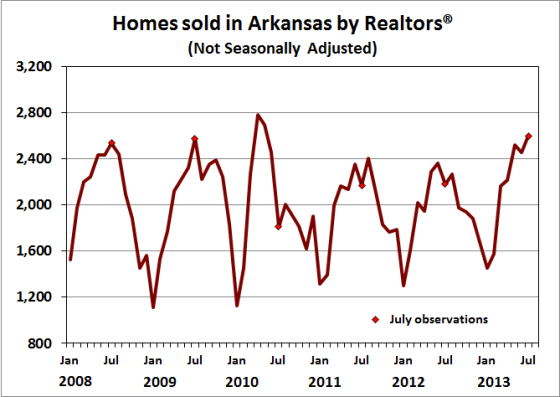 Seasonally adjusted data, shown in the next chart, clearly illustrate the rising trend.  During 2011 and 2012, average monthly sales seemed constrained to less than 2,000 per month.  The seasonally-adjusted data show that the  symbolic 2000/month pace has been exceeded every month this year — with the trend accelerating into the busy summer months. 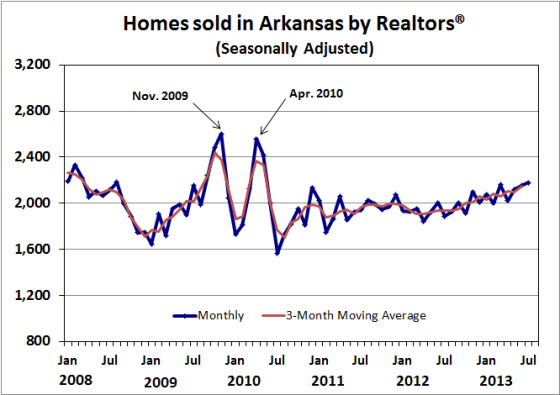 Data for individual counties shows that sales increases are not limited to any one metropolitan area, but are widespread.  Among the 8 largest counties (by sales volume), all except Pulaski have shown double-digit growth rates in 2013 (year-to-date figures).  For the central Arkansas counties of Faulkner, Pulaski and Saline combined, the year-over-year increase has been 11.3%.

Typical seasonal patterns suggest that sales will taper-off over the rest of the year.  But given the strong summer sales pace, 2013 total sales will significantly exceed the lackluster figures from 2011 and 2012.