New data from the Federal Housing Finance Agency (FHFA) showed that home prices continue to rise, although the rate of increase in Arkansas remains below the national average.   Among the various indexes published by the FHFA, the most informative is the “Expanded-Data Index,” which incorporates data from FannieMae, FreddieMac, FHFA as well as county records.  By this measure, Arkansas house prices in the second quarter were unchanged from the previous quarter, but were up 2.7% from a year ago.  Nationwide, the Expanded-Data Index showed prices up 2.4% from the previous quarter and up 7.5% from 2012:Q2.  As shown in the chart below, it is not surprising that Arkansas house price appreciation is slower than the national average:  During the nationwide home price crash, declines in Arkansas were far smaller than for the U.S. as a whole.  Compared to the peak of home prices in early 2007, prices in Arkansas are down 5.6% while the nationwide average is down 17.6%. 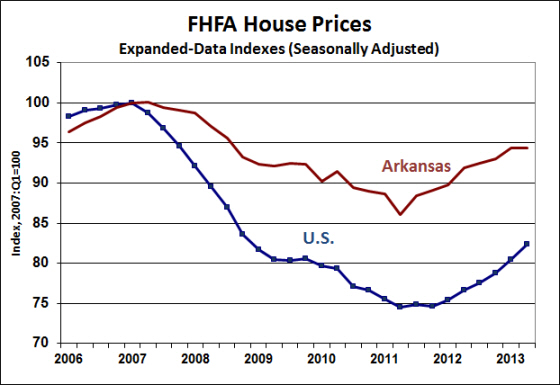 Data for Arkansas’ metro areas showed that the upward momentum in house prices is widespread.  According the FHFA “All-Transactions Indexes” (which include sales and refinancings), prices were flat in the Little Rock metro area but were up in all other parts of the state.  Over the past year, the largest price increases have been in the Fayetteville-Springdale-Rogers MSA — which had also experienced the largest decline from 2007-2010.  Prices have also been rising at a brisk pace in Texarkana, Hot Springs, and Jonesboro.  Over the past 5 years, prices have increased in Jonesboro and Texarkana, and have held steady in Fort Smith. 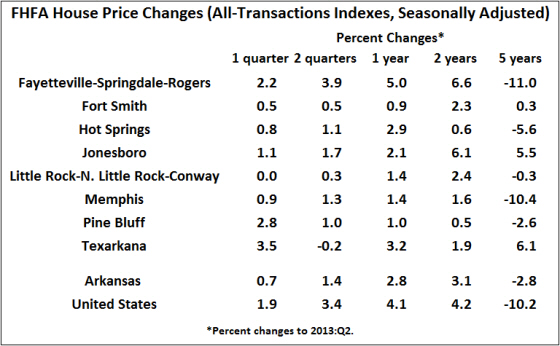 The MSA house price data are broadly consistent with the CoreLogic® data that we discussed in a recent post.  Specifically, the CoreLogic data suggested that price increases in Fayetteville and Texarkana were particularly robust after excluding “distressed sales.”  The FHFA data are based on mortgages that are processed through FannyMae and FreddieMac, and are likely to under-sample distressed sales. The CoreLogic data also suggested that recent house price appreciation has been relatively slow in Fort Smith and Hot Springs.

The chart below illustrated the longer-run perspective, comparing FHFA house prices indexes for Arkansas’ MSAs from a common starting point:  2007:Q1.  Over that 6-1/2 year time span, prices have increased in all of the state’s metro areas except for Hot Springs, Memphis, and Fayetteville.  Prices in Northwest Arkansas suffered the state’s largest declines during the house price collapse — down almost 20% in early 2011.  But since that low-point, prices in the Fayetteville MSA have been showing significant recovery.  In Texarkana, the net change in house prices since 2007:Q1 has been an increase of over 10%. 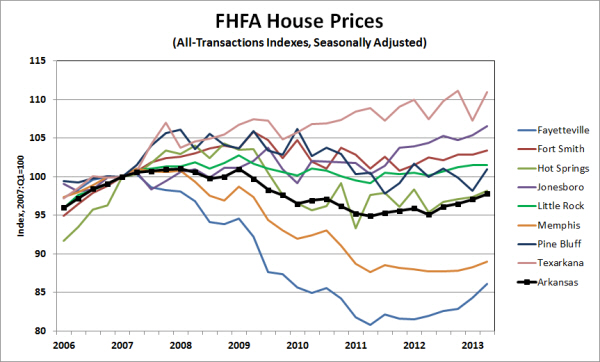