New data on employment and unemployment for metropolitan areas came out this morning.  The data are in that awkward mid-revision phase that happens every year at this time, but the new information is informative. 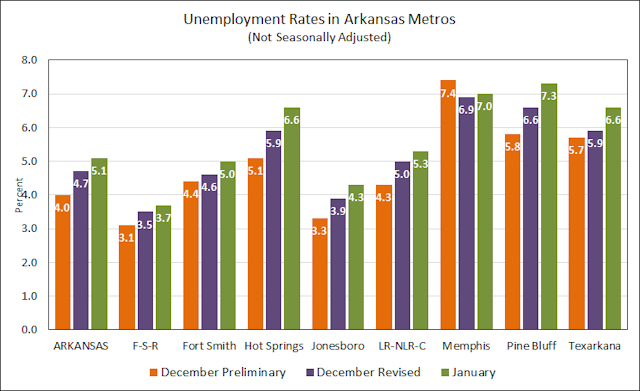 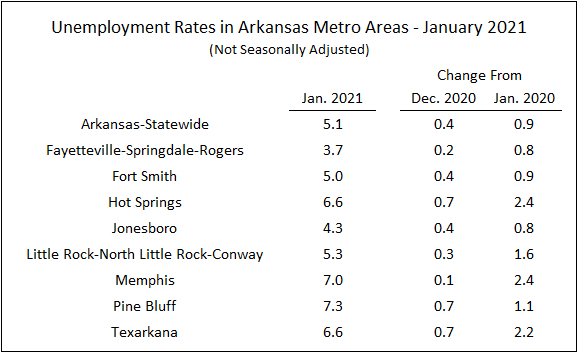 Payroll Employment
Metropolitan area data on Nonfarm Payroll Employment have been fully revised, and the new numbers show some unexpected changes to patterns of employment around the state (at least within metro areas).  As shown in the figures below, the revisions were particularly significant for Jonesboro and Texarkana.  In both areas, the declines in employment in April 2020 now appear to have been much larger than originally estimated, and recovery to pre-pandemic employment levels has been far slower.  Revisions to data for Hot Springs show the same pattern, but with smaller revisions to previously reported levels.  Note, however, the sharp drop in employment in Hot Springs in January 2021 (more below). On the other hand, employment growth since April was revised higher in several metros, including Fayetteville, Fort Smith, and Pine Bluff.

The magnitudes of the revisions are detailed in the table below.  As shown in the first column, the net impact of revisions on employment levels in December 2020 were mixed.  The slower pace of recovery in Jonesboro, Texarkana and Memphis resulted in significantly lower employment at the end of the year, while Fayetteville, Fort Smith, Little Rock and Pine Bluff are now estimated to have higher employment than previously reported.

Payroll employment increased in January in most metro areas; however, as shown in the table below, employment was down in Jonesboro and Memphis and experienced a particularly sharp drop in Hot Springs.  Compared to a year ago, employment is down across the state.  Prior to the revision, Jonesboro was registering a positive year-over-year growth rate, but the new data show it down by more than the statewide average.  The largest year-over-year declines are recorded for Little Rock and Texarkana.  At the other extreme, having expanded 9.8% since April 2020, employment in the Fayetteville metro area is down by only one percent from pre-pandemic levels. 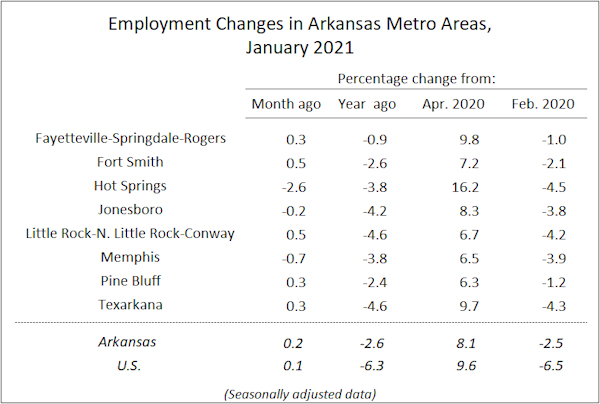 The full set of revisions to labor force, employment and unemployment will be available at the time of next month’s release, scheduled for April 16, 2021.