New state-level data on employment and unemployment shows that the state’s economy is continuing to recover from the pandemic-related contraction in 2020.  Today’s report from the Bureau of Labor Statistics includes a decline in the unemployment rate and an increase in nonfarm payroll employment.  The payroll data released this morning also includes annual benchmark revisions. 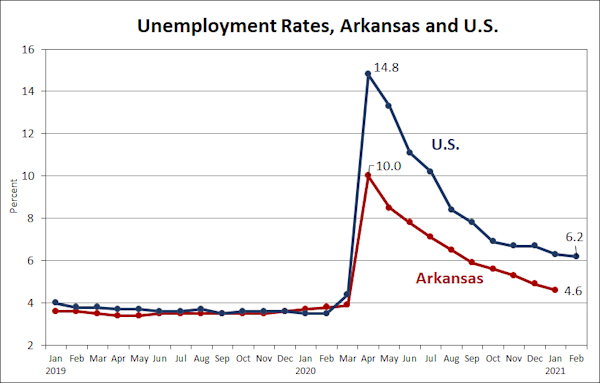 The number of unemployed Arkansans continued to decline, falling by over 3,600 to 63,536.  The payroll survey indicated only a modest increase in employment (+275), so the labor force shrank by 3,360.  The figure below shows the most recent changes in the context of the revised data released last week. 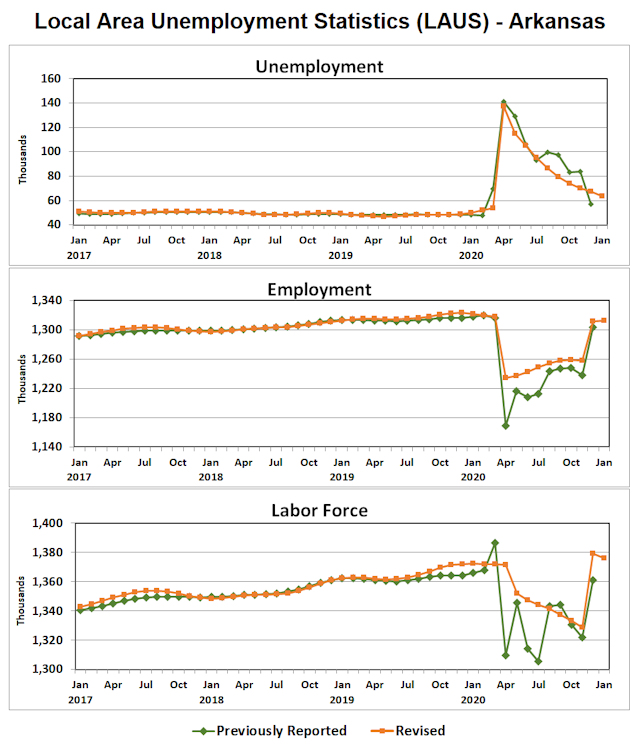 Payroll Employment
Today’s report included the results of the annual benchmark revision procedures, in which payroll data for the past 21 months are updated and revised.  Accordingly, all data were revised from April 2019 forward.  Seasonal factors were revised back to 2016.  Some series (both seasonally adjusted and not seasonally adjusted) were revised back as far as 1990. As shown in the figure below, the revisions had notable impacts on Arkansas employment:  Employment growth was revised higher for 2019, raising the precipice from which employment plunged in April 2020.  Over the remainder of 2020, the revised statistics show a more rapid pace of recovery as well. 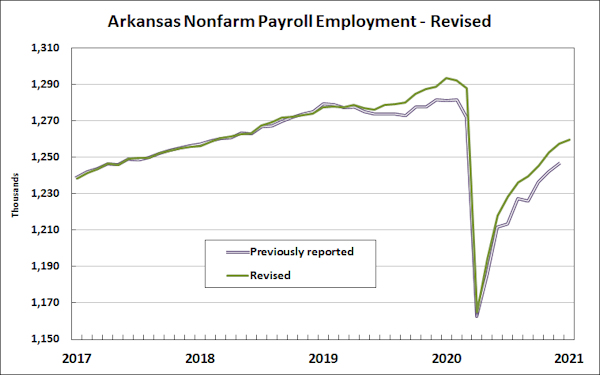 The table below summarizes the change in total employment over the course of 2020, showing both previously-published and revised data broken down by sector.  The revised data show larger pandemic-related declines in April for most sectors, with notable exceptions including Manufacturing, Education & Health Services, and Other Services.  During the April-December period, the revised data generally show larger rebounds in most sectors.  An important exception is Retail, where employment was previously estimated to have increased 19,800 over the 8-month period but is now estimated to have increased by 16,900. 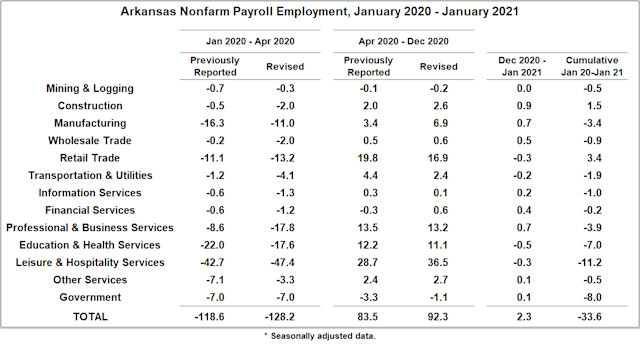 The final two columns of the table present the monthly change for January, reported this morning, along with a year-over-year comparison with January 2020.  Overall, 2,300 jobs were added in January (seasonally adjusted), with gains particularly prominent in the goods-producing sectors of Construction and Manufacturing.  Compared to a year earlier, the January numbers show net job losses totaling 33,600.  Education & Health Services and Leisure & Hospitality Services together constitute over half of the total losses.

The figure below compares employment growth in Arkansas with that of the U.S., showing employment indexes normalized to equal 100 in the pre-pandemic month of February 2020.  The decline from February to April was 9.8% (previously reported at 9.3%) compared to -14.6% for the U.S.  As of January 2021, Arkansas payroll employment had returned to a level of only 2.5% below February 2020, while U.S. employment remained 6.5% lower. 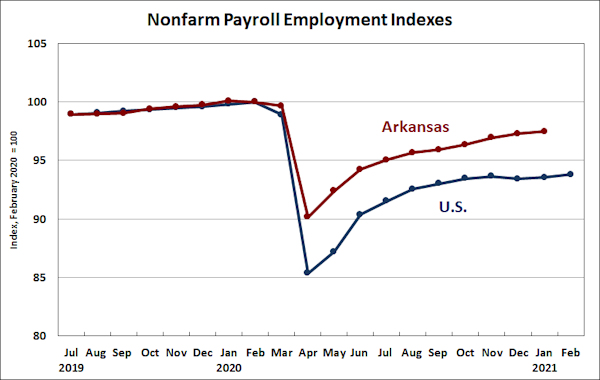