Last week, the Bureau of Labor Statistics (BLS) released revised data for state unemployment rates in 2020.  The COVID-19 pandemic presented a number of challenges in collecting data, modeling, and measurement.  Throughout the year, the BLS adopted modified procedures for handling “outliers.”  Outliers are unusually large changes in the data that are usually attributable to sampling error or other technical issues, but in this case represented the actual impact of COVID-related idling of workers.  Without getting too deep into the weeds, the new revised statistics were produced using “a new generation of time-series models” that provides more flexibility in incorporating information from the trend-covariates, Nonfarm Payroll Employment and Unemployment Insurance Claims.

The data were revised all the way back to 1976 using the new methodology, but most of the significant revisions affect the data for 2020.  The figure below shows how the revisions affected the unemployment rate for Arkansas.  The new statistics generally show lower unemployment in Arkansas than previously estimated.  The rate rose only slightly in March, and peaked at 10.0% in April, compared to the previously-estimated peak of 10.8%.  Thereafter, the new estimates show a steady downward trajectory with the unemployment rate ending the year in December at 4.9% rather than 4.2% as originally estimated. 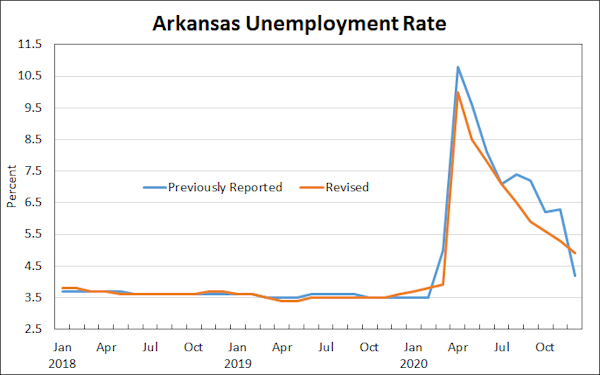 The data on numbers of employed and unemployed that underlie the unemployment rate calculations are shown below.  The overall contour of revised unemployment rate changes during 2020 derives primarily from revisions to the number of unemployed.  For both March 2020 and December 2020, the new data eliminate previously-reported large jumps in the number of unemployed.  In intervening months, the new numbers show a more gradual decline.

New estimates of employment and total labor force were also revised considerably.  The initial drop in employment in April 2020 is now estimated to have been only 84 thousand, rather than the originally-reported 148 thousand.  The uneven pattern of employment recovery is now smoother than previously reported, although a large spike in employment in December 2020 remains.  With regard to the labor force, the changes to both components—employed and unemployed—contribute to a smoother profile with an initial drop in  participation in May followed by further declines through November, with a sharp recovery in December. 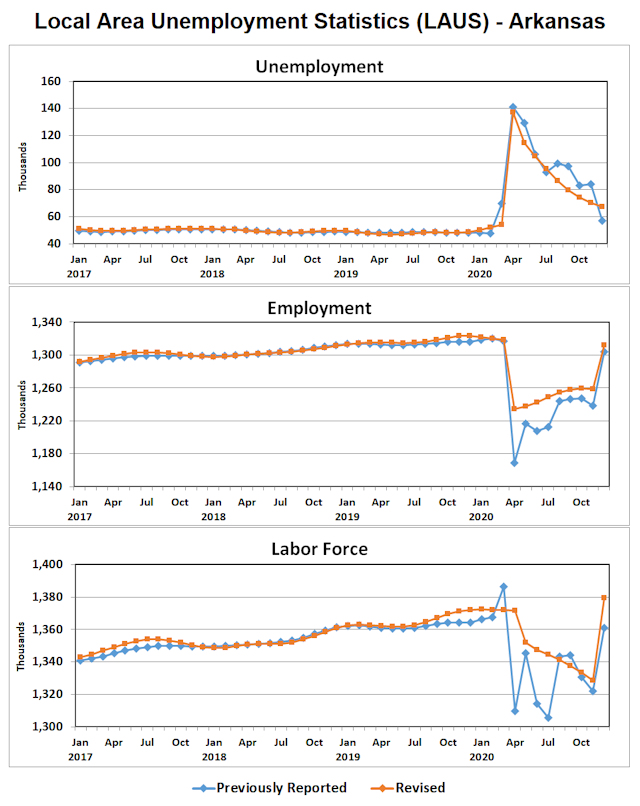 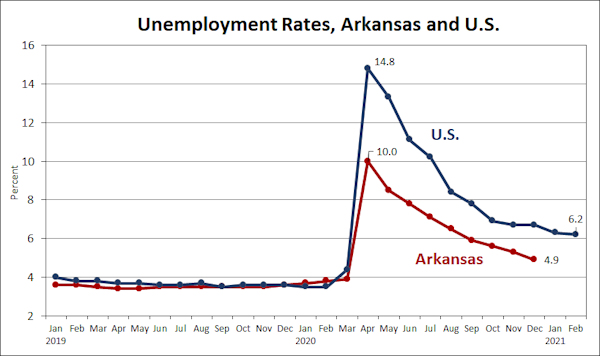 The sharp jump in December’s estimates for employment and labor force are somewhat mysterious, and are not reinforced by data from the nonfarm payroll survey (although the payroll data will be revised next week).  After the December increase, the labor force participation rate appears to be back on track in Arkansas, while continuing to lag below pre-pandemic levels for the U.S. 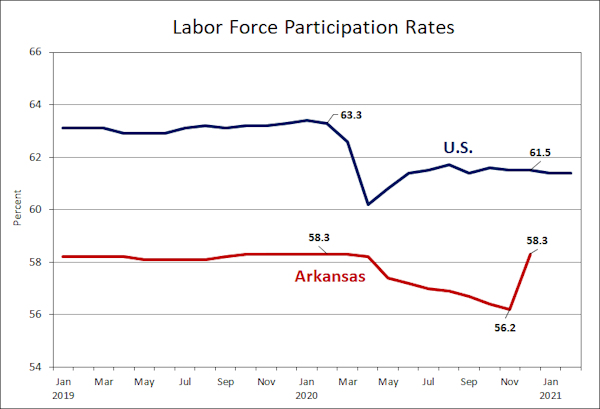