The (preliminary) end-of-year numbers are in for metropolitan employment and unemployment, with Arkansas’ metro areas showing mixed performance for the year.  From December 2016 through December 2017, unemployment rates declined in six of Arkansas metro areas.  The rate in Northwest Arkansas was unchanged at the very low level of 2.7%, while Little Rock’s unemployment rate ticked up one-tenth of a percentage point to 3.4%. 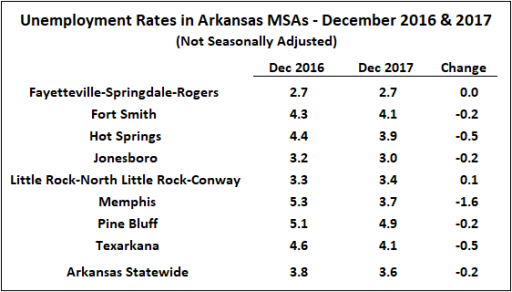 Over the first half of the year, unemployment rates trended down in all of Arkansas’ metro areas (seasonally adjusted).  From July through December the pattern was mixed: Rates edged up in Fayetteville, Jonesboro, Little Rock, and Pine Bluff.   By the end of the year, over two percentage points separated the highest unemployment rate in the state (Pine Bluff at 5.1%) from the lowest (Fayetteville at 2.8%). 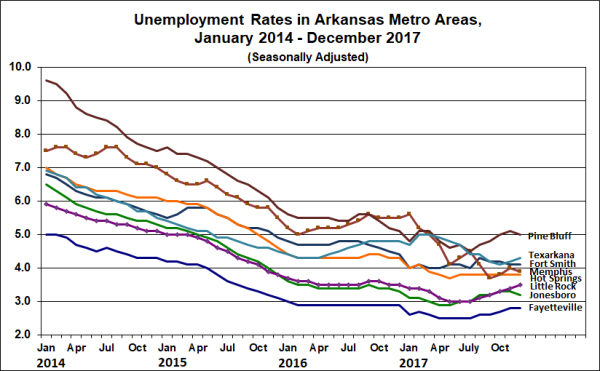 Payroll Employment
Nonfarm payroll employment ended the year with monthly declines in Fayetteville, Fort Smith, Jonesboro, and Memphis.  Little Rock was the only metro area in the state to experience a monthly increase.  Compared to a year earlier, five metro areas saw expanded employment, with gains ranging from 0.3% in Memphis to 2.4% in Fayetteville.  Employment in four of the eight remains below pre-recession levels of ten years ago.  Two metro areas, Pine Bluff and Texarkana, have yet to recover to the levels of employment that prevailed at the end of the great recession. 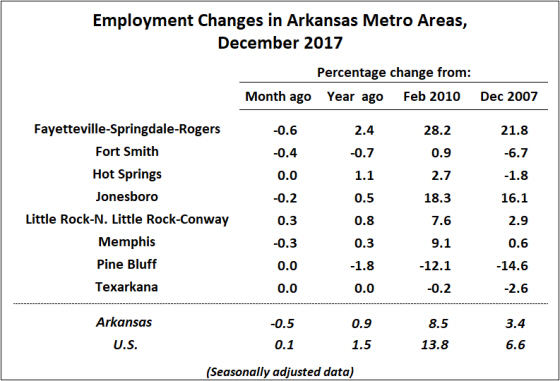 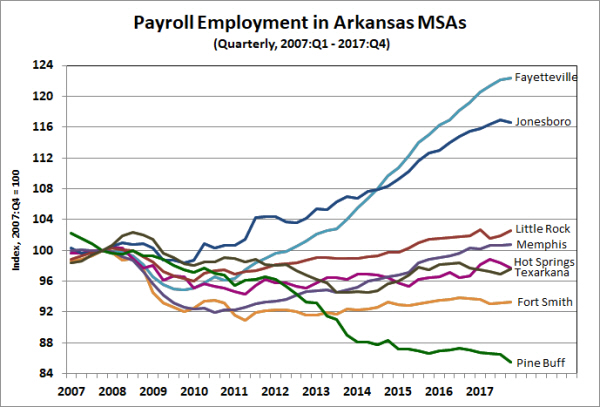 Today’s report contains the final preliminary employment data for 2017, with both the household and payroll data scheduled to be revised in coming weeks.  Updated statisics on nonfarm payroll employment will be released for both states and metro areas on March 12, 2018.  Metro area data from the household survey, including unemployment rates, will be revised and updated by April 20, 2018.