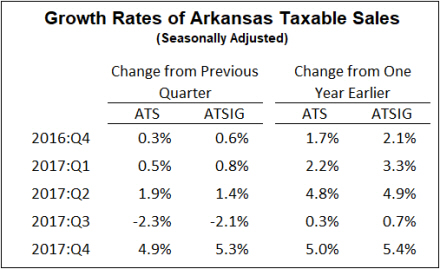 The fourth quarter increase mitigates concern about weakness in sales growth during the third quarter.  Compared to the fourth quarter of 2016, ATS and ATSIG were up 5.0% and 5.4%, respectively.  Inflation, as measured by the price index for personal consumption expenditures (BEA), registered 1.7% from 2016:Q4 to 2017:Q4, so the increases in taxable sales represent real, inflation adjusted gains of well over 3%.  Over the longer term, from 2009:Q2 through 2017:Q4, ATS and ATSIG have increased at annual rates of just over 3%, which implies real, inflation-adjusted growth of around 1.6%. 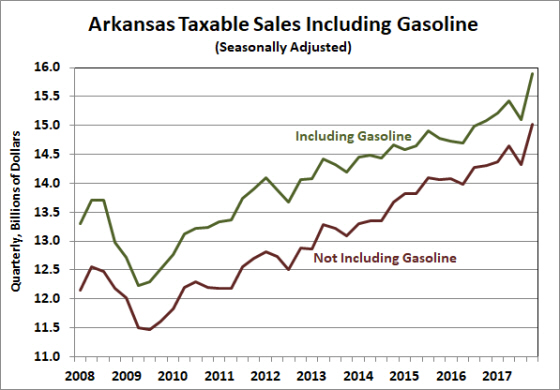 The combined taxable sales figures for November and December provide some insight into the strength of the most recent holiday shopping season.  As illustrated below, ATS in November and December rose 7.2% from the previous year, the largest increase in over a decade.  For the same period, U.S. Retail Sales expanded 4.8%.

The 7.2% growth figure is likely to overstate the actual increase in holiday spending since online retailer Amazon was not remitting sales tax receipts in 2016 but was doing so in 2017.  Because information on any specific taxpayer is confidential, we cannot quantify the magnitude of this “Amazon effect.”  According to officials at the Department of Finance and Administration, however, the impact has not been particularly notable (See Arkansas Business article).   One reason for the muted impact of the Amazon effect is that the company is remitting taxes only for its direct sales, and not for third-party vendors who sell products through the Amazon marketplace.  Given the strength of the increase in 2017 holiday sales, and the stated minimal effect of Amazon’s sales tax submissions, it does seem clear that Arkansas retailers experienced a healthy increase in sales compared to the 2016 holiday shopping season.

Arkansas Taxable Sales (ATS) is calculated by the Arkansas Economic Development Institute to serve as a timely proxy for Arkansas retail sales. The series is derived from sales and use tax data, adjusting for the relative timing of tax collections and underlying sales, changes in tax laws, and seasonal patterns in the data.  Arkansas Taxable Sales Including Gasoline (ATSIG) incorporates data on the state motor fuel tax and gasoline prices from the Oil Price Information Service. A spreadsheet of the monthly and quarterly data is available here: Arkansas Taxable Sales 2017:Q4 (Excel file).