As previously reported, statewide unemployment declined by two-tenths of a percent in December — a result that is mirrored in new statistics for Arkansas’ metropolitan areas.  As shown in the table below, unemployment rates fell in all eight metro areas that include parts of Arkansas. 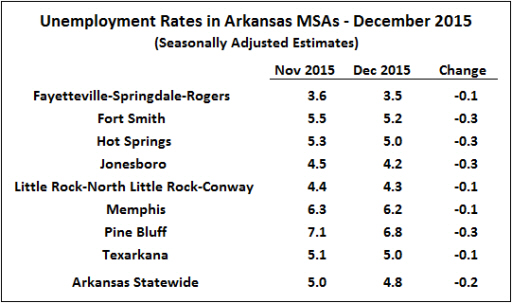 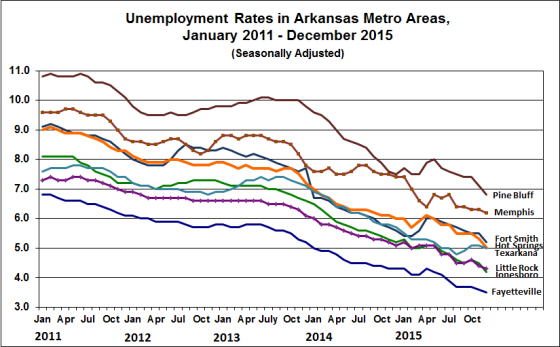 Payroll Employment
Changes in nonfarm payroll employment were mixed.  Employment declined in Jonesboro, Little Rock, and Pine Bluff, but showed strong gains in Fayetteville, Fort Smith, Hot Springs and Memphis.  Compared to a year ago, payroll employment was up in six metro areas, having fallen in Fort Smith and Pine Bluff.  Growth over the past 12 months has been particularly strong in Fayetteville and Jonesboro. 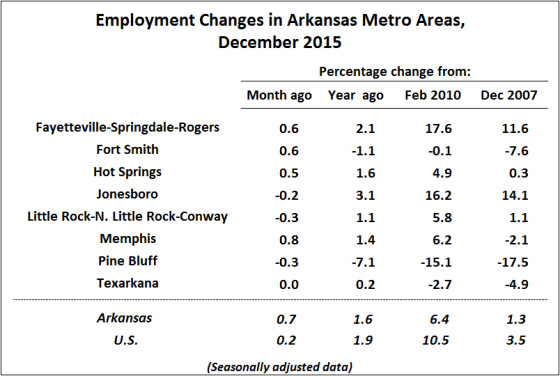 As shown in the figure below, strong payroll employment growth in Fayetteville and Jonesboro continues a trend that has characterized the entire economic expansion, with the two northern corners of the state experiencing far more rapid growth than the rest of the region.  At the other extreme, employment in Pine Bluff has continued to decline.  At the end of 2015, Pine Bluff payrolls were down 17.5% from pre-recession levels. 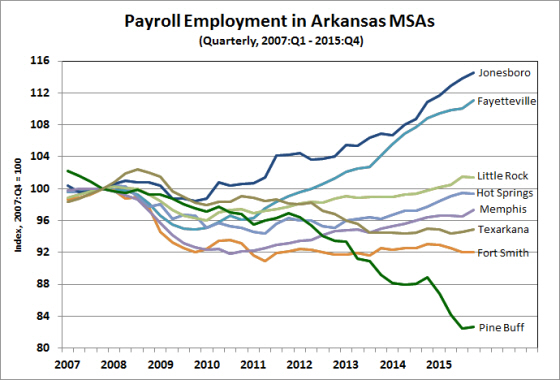 Note:  The metro-area payroll data will be subject to the annual benchmark revision process, with revised numbers to be reported in mid-March.  Our estimates of the statewide employment revisions suggest that the updated data will show slower growth among at least some of the state’s metro areas, particularly for the second half of 2014.