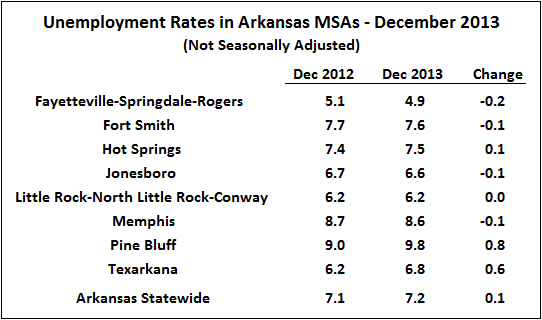 Smoothed seasonally adjusted estimates show that the most recent month-to-month changes were more favorable.  From November to December, unemployment rates declined in four of the state’s metro areas, were unchanged three, and ticked up by 0.1% in Fort Smith. 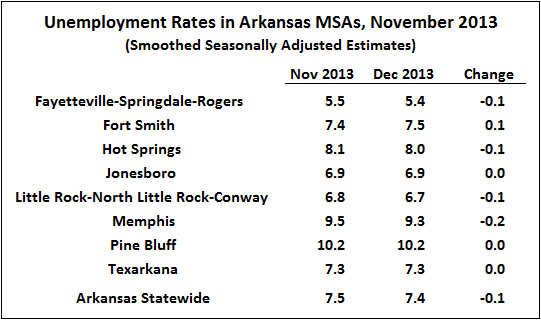 Over time, the smoothed seasonally adjusted estimates show that progress toward lower unemployment stalled, at best (e.g. Fayetteville, Jonesboro, Little Rock) and has reversed in other areas (Pine Bluff, Memphis, Hot Springs, Texarkana).  Overall, the state’s unemployment rate has been stuck in the range of 7% to 7.5% for the past two years. 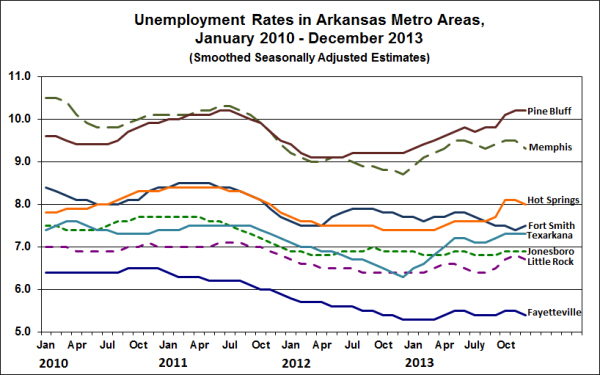 Payroll Data
The latest data from the payroll survey show similarly stagnant trends — at least for most of the state’s metro areas.  From November to December, payroll employment declined in Fort Smith, Jonesboro, and Texarkana.  Hot Springs showed a strong month-to-month increase, but was down 0.8% from the previous year.  Pine Bluff and Texarkana also showed year-over-year declines. 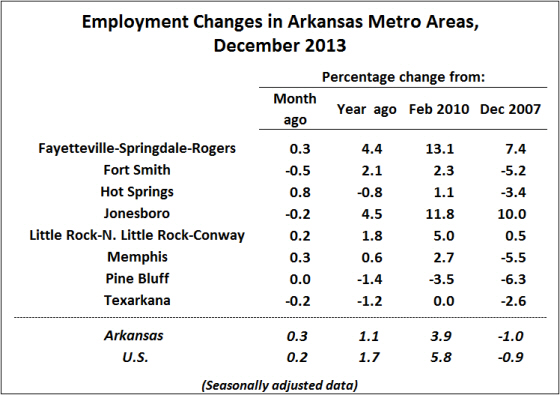 Since the onset of the 2008-09 recession, 3 of the state’s 8 metro areas have recovered to the point of having positive net job growth:  Jonesboro, Fayetteville, and Little Rock.  The remaining Arkansas metro areas (along with the statewide total) remain below employment levels of December 2007.  The chart below shows that patterns of employment growth around the state have been varied.  While Fayetteville, Jonesboro and Little Rock have followed consistent recovery paths since the end of the recession, other areas have recovered more recently (e.g.  Fort Smith, Hot Springs, Memphis).  After an initial recovery phase, employment in Texarkana has been declining since early 2011.  Pine Bluff has been on a downtrend throughout the recession and recovery periods. 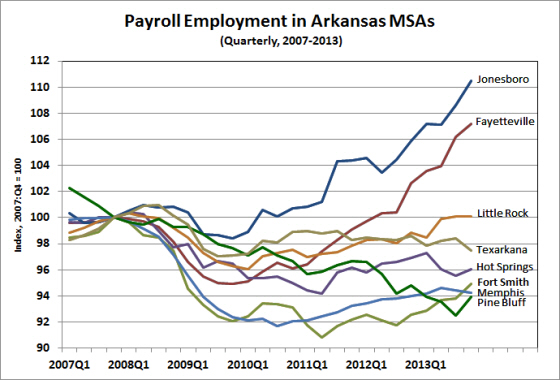 Household/Payroll Divergence
We have noted that the payroll and household surveys have been providing conflicting signals for statewide employment.  This is also true at the metro-level.  The following chart shows that the household measure of employment has been consistently under-reporting employment growth relative to the payroll measure.  Although the magnitudes of the growth rates differ, both surveys show the similar relative performances among the state’s metro areas.  Upcoming revisions (particularly to the payroll figures) might help reconcile the discrepancies between the two measures of employment. 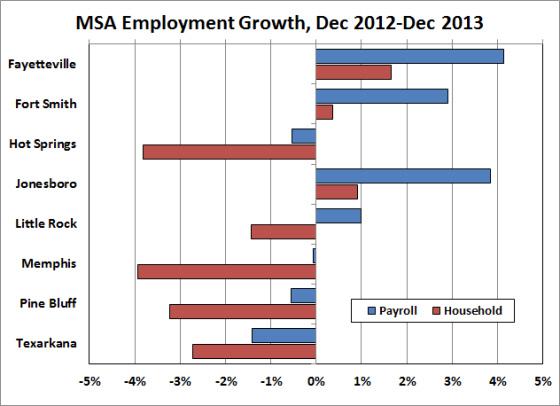