Arkansas home sales ended the year on a strong note, with December sales up 17.6% from the previous year.  The year-end data from the Arkansas Realtors® Association confirmed that the slight dip recorded in November was an aberration — likely associated with the fact that the Thanksgiving holiday fell at the end of the month.  For November and December combined, sales were up 6.8% from the previous year.  The total for December was the highest recorded for that month since 2006. 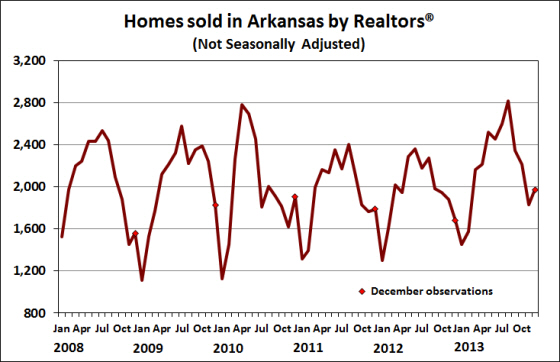 Annual totals from the Realtors’ data showed that sales were up 12.7% for the year.  In fact, this figure probably understates the true growth rate.  It is not uncommon for late-reported sales to result in upward revisions to the total figures, so the numbers for November and December are likely to be even higher when all the data are in.  As shown in the figure below, seasonally-adjusted sales showed a significant surge in 2013, representing a long-awaited recovery from the lackluster pace of 2011 and 2012. 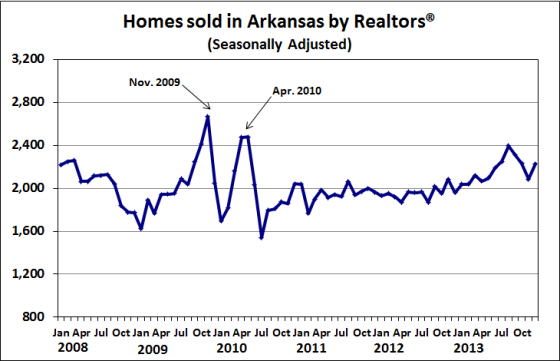 Some of the rapid growth in home sales during 2013 was associated with demand overhang from the previous two years.  As a result, sales growth in 2014 is likely to be slightly lower.  Nevertheless, statewide home sales are still well below their pre-recession pace, so there is plenty of room for expansion.  In addition, historically low home mortgage rates should continue to foster a favorable environment for prospective home buyers.  The Arkansas Economist’s forecast for home sales in 2014 (from the November Forecast Conference) is for an increase of 7.2% compared to 2013.