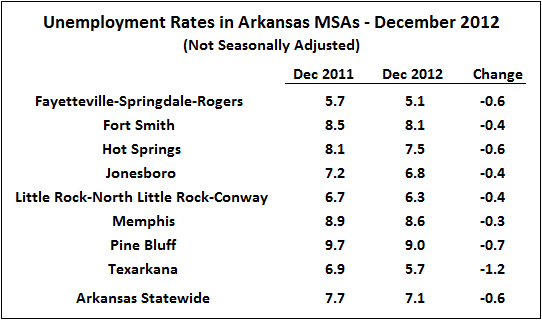 December unemployment rates were up from the previous month, but such increases are typical of December when schools and universities break for the year-end holidays.  The BLS smoothed seasonally adjusted estimates provide a more informative comparison of month-to-month changes.  The smoothed seasonally adjusted numbers show little change in unemployment rates across the state.  Rates ticked down by 0.1% in Fort Smith and Texarkana and ticked up by 0.1% all the other metro areas except Jonesboro (which was unchanged). 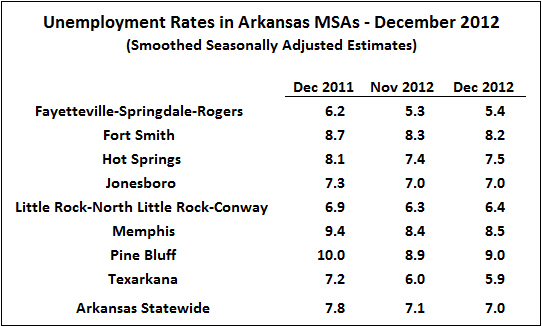 Payroll Employment
Nonfarm payrolls expanded in December for Jonesboro (+1.0%) and Hot Springs (+0.3%), but were unchanged or lower the state’s other metro areas.  Compared to December of 2011, employment was up in Fayetteville, Jonesboro, Pine Bluff, and Texarkana.  However, it was unchanged or lower in Fort Smith, Hot Springs, Little Rock, and Memphis. 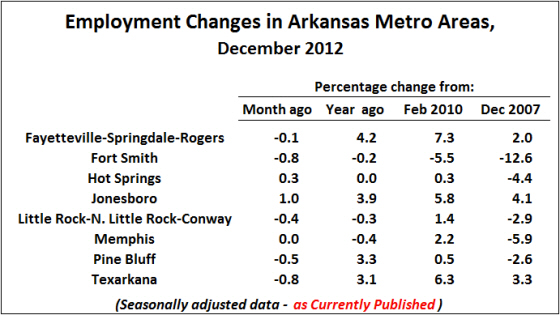 As detailed last month, the next publication of metro area employment data will incorporate the annual benchmark revisions.  The revised data will show a somewhat different picture of employment conditions around the state, particularly in the figures for cumulative employment changes over time.  The table below details our best estimates of what the revised data will indicate.  The new figures will show that employment declined during 2012 in only two metro areas:  Little Rock and Memphis.  The revised data are expected to show a substantial upward revision to the data for Fort Smith, with the result that cumulative changes since the trough of February 2010 will be positive for all metro areas in the state.   On the other extreme, payroll data for Texarkana are expected to be revised downward — resulting in the reversal of cumulative gains since the pre-recession peak of December 2007. 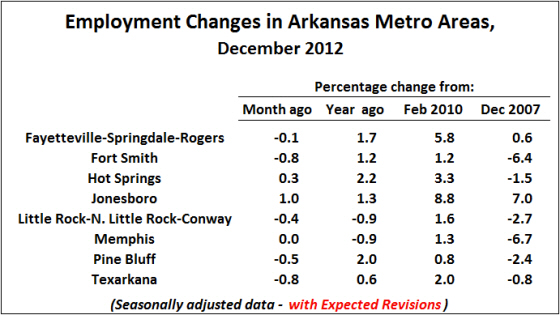 These expected revisions are only estimates.  Data for metro areas can also be subject to substantial changes in estimated seasonal factors, so the post-benchmark data may differ from the figures summarized in the table above.  Nevertheless, the magnitude of expected revisions for Fort Smith and Texarkana, in particular, are likely to be notable.