“After adjusting for a relatively low cost of living, incomes in Arkansas allow for a higher standard of living than in some of the higher-cost regions of the country.”

It is widely recognized that changes in income and spending over time should be adjusted for changes in prices; i.e., inflation.  Comparisons of income across countries are also routinely adjusted for differences in prices using exchange rates or other relative price measures.  Less common is the adjustment of state and local data to account for differences in relative prices across regions within the United States.  This type of inter-regional relative price adjustment is familiar to regular readers of the Arkansas Economist — in the context of interpreting poverty rates published by the Census Bureau (see, here and here, for example).  In recent years, researchers at the U.S. Bureau of Economic Analysis (BEA) have been developing statistics on regional price differences that can be applied more generally to income and consumption data for the states and metropolitan areas of the U.S.  This year, the BEA is scheduled to publish the first set of annual updates for personal income adjusted by regional price parties (RPPs).

The baseline estimates for these regional price parties were published in the Survey of Current Business in August 2012 — Regional Price Parities for States and Metropolitan Areas, 2006–2010.   Using data on rents from the American Community Survey (Census Bureau), price data from the Consumer Price Index (Bureau of Labor Statistics), and expenditure shares from the Personal Consumption Expenditure survey (BEA), the newly-developed RPP statistics allow for the comparison of the cost of living among states and metro areas in the U.S.

Normalizing the U.S. average to have an index value of 100, the estimate of Arkansas’ relative price level is calculated to be 89.3.  That is, the overall level of prices in Arkansas is more than 10% lower than the national average.  For the calculation period 2006-2010, the highest and lowers price parities in the nation were calculated for Hawaii (116.1) and South Dakota (87.2), respectively.  The Arkansas level of 89.3 ranked our state as having the 6th lowest prices in the nation.

This as in interesting finding in its own right, but is even more important in what it tells us about relative incomes and purchasing power.  For example it is widely known that Arkansas has one of the lowest levels of average income in the nation.  But to the extent that prices are also lower than in other regions, the differences in price-adjusted standards of living are less extreme than the unadjusted dollar-values suggest.  The map below, reproduced from the article in the Survey of Current Business, shows how per capita personal income changes after adjusting for regional price parities.  Arkansas is one of the states where the purchasing power of income is increased the most by the adjustment — specifically, price-adjusted per capita income for 2010 is 12.2% higher than unadjusted per capita income. 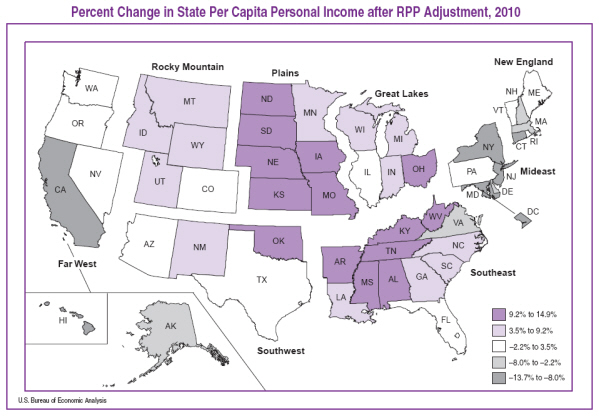 The average per capita income in all 50 states plus the District of Columbia was $39,900 in 2010.  By construction, this is also the price-parity-adjusted level of income for the U.S.  Without price adjustment, Arkansas’ per capita income was $32,800 — approximately 82.2% of the national average.  After adjusting for the relatively low cost of living in Arkansas, however, the RPP-adjusted income in Arkansas was the equivalent of $36,800 — about 92.2% of the U.S. average.  The table below summarizes this comparison and presents data on RPP-adjusted incomes for the eight metropolitan areas that include parts of Arkansas. 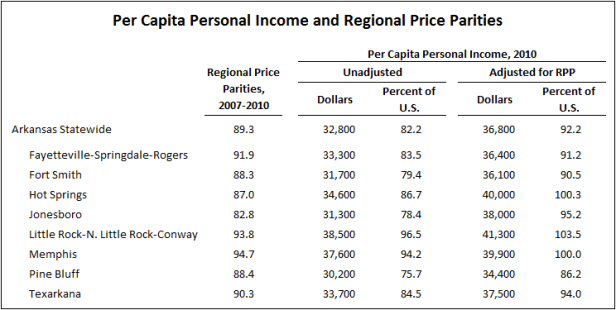 The research on RPPs is still considered to be experimental, with economists at the BEA and elsewhere working to improve the quality of regional price data and the methodology for compiling them into regional index values.  The data will undoubtedly be refined and revised as research continues.  But the overall implications of the findings are clear:  after adjusting for a relatively low cost of living, incomes in Arkansas allow for a higher standard of living than in some of the higher-cost regions of the country.