The most recent General Revenue Report  from the Department of Finance and Administration (DF&A) indicated a slight decline in sales and use tax revenue compared to the previous year, but both of the previous months’ reports had shown year-over-year increases.  As a result, preliminary figures for Arkansas Taxable Sales (ATS) for the fourth quarter of 2012 show a rebound after two consecutive quarters of decline.  Fourth quarter taxable sales were up 3% from the previous quarter (seasonally adjusted) and were 0.9% higher than the fourth quarter of 2011.

According to data from the Oil Price Information Service, monthly average gasoline prices in Arkansas declined over the quarter, falling from $3.65 per gallon in September to $3.11 in December.  On a quarterly average basis, , gasoline prices declined from an average of $3.46 in the third quarter to $3.27 in the fourth quarter.  Preliminary information on gasoline sales from DF&A’s Motor Fuels Tax section indicate that fourth quarter sales declined slightly from the third quarter — but less than is typical for that time of year.  So after seasonal adjustment, total gasoline sales were up 2.4%.  Consequently, Arkansas Taxable Sales Including Gasoline (ATSIG) were up 2.9% — nearly the same rate of increase as ATS. 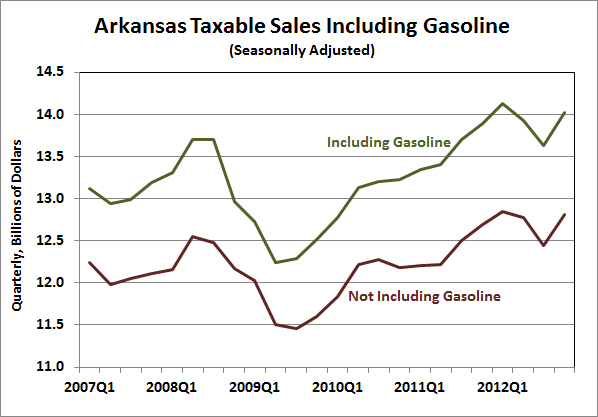 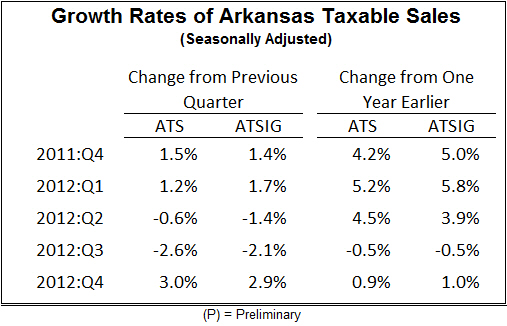 The weakness of taxable sales growth during the second and third quarters of 2012 remains somewhat mysterious.  Available data on income and employment in Arkansas did not show notable weakness over that period, but those measures are subject to future revision.  National retail sales statistics showed a decline in the second quarter, but  rebounded in the third quarter.  Regardless of the cause of the mid-year slump, the fourth quarter recovery suggests positive momentum for consumer and business spending going into 2013.

At this point, the fourth quarter data are incomplete.  Final figures on sales and use tax collections are not yet available, nor are the data for gasoline sales in December (the gasoline component of ATSIG in this preliminary report is includes December figures that are derived from model-based estimates).  The data will be updated here on the pages of the Arkansas Economist when final information becomes available.

* Data are preliminary until the release of the DFA report, Arkansas Fiscal Notes for January 2013, and will be updated when information becomes available.