Today’s Arkansas Democrat-Gazette reports on mass layoff events in Arkansas during 2011.  The data from the Bureau of Labor Statistics showed that there were 154 mass layoff actions in Arkansas during 2011, resulting the separation of 16,665 workers (as measured by new filings for unemployment insurance benefits).  This was a record high for Arkansas, yet the data show a net increase in employment overall.  Although mass layoff events generate news headlines, they constitute a relatively small component of dynamic labor market flows.

To put the Arkansas total in context, the following table compares total separations associated with mass layoffs with the size of each state’s labor force.  This calculation allows us to compare the relative importance of mass layoffs among the states, accounting for differences in their sizes.  The comparison shows that total mass-layoff separations in Arkansas amounted to 1.22% of the state’s labor force.  The shares ranged from 0.12% in South Dakota to 2.40% in Wisconsin.  Arkansas ranked number 17 among the 50 states plus D.C. 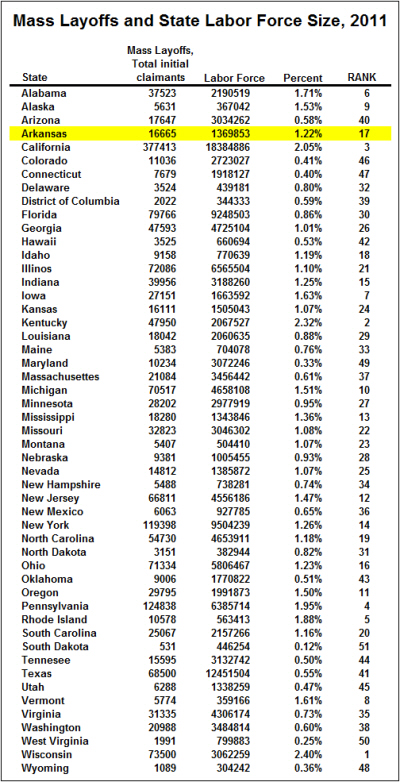 More generally, mass layoff events are only one component of gross job flows.  To get a sense of their overall importance, consider the following comparisons for the U.S. in 2011:  Separations associated with mass layoffs nationwide amounted to 1,808,451.  According to the BLS’s Job Openings and Labor Turnover Survey (JOLTS), total layoffs and discharges were 20.7 million.  Hence, mass layoffs accounted for only 8.8% of total layoffs and discharges.  In turn, layoffs and discharges accounted for less than half of the total 48.2 million job separations in 2011.  Meanwhile, new hires totalled 50.1 million.  The gross separations and hiring numbers were more than 25 times as large as the net change in employment — and the net increase in employment (as measured by the JOLTS data) was larger than the total number of mass-layoff separations.  When we hear about monthly or yearly changes in employment, the reported net figures represent only a tiny fraction of total labor market activity.  Similarly, mass layoffs represent a very small share of total employment flows.