The unemployment rate for Arkansas 7.6% in February — unchanged from the previous month.   The new data from the U.S. Bureau of Labor Statistics (BLS) and the Arkansas Department of Workforce Services (DWS) showed that changes in the number of employed and unemployed were smaller than in recent months, but the direction of the changes continued to be favorable:  The number of employed was up approximately 3,400 and the number of unemployed was down by 400.  February was the 7th consecutive month of rising employment and falling unemployment.  The U.S. unemployment rate was also unchanged in February, holding at 8.3%. 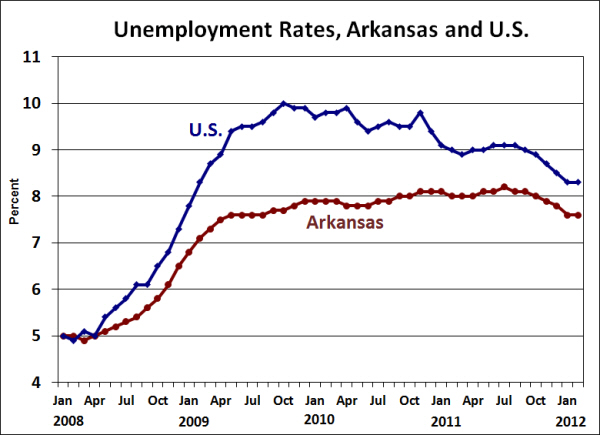 The payroll survey showed a small net increase in jobs for the month, up approximately 700 jobs (seasonally adjusted).  Sectors showing job losses included Trade, Transportation & Utilities (-1,800), Education & Health Services (-700), and Manufacturing (-200).  Government employment was up 2,300, largely attributable to an increase in State Government employment (+2,000).  Leisure & Hospitality Services and Other Services were also up for the month. 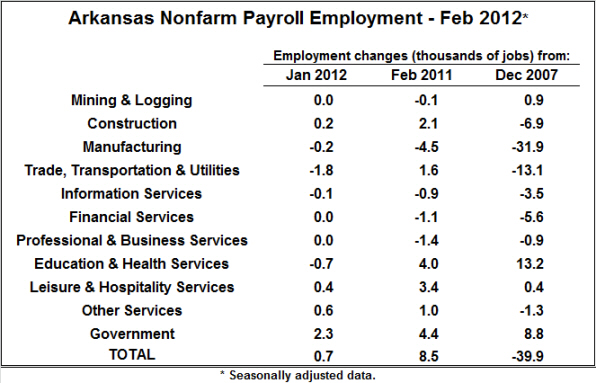