The Bureau of Labor Statistics (BLS) reported this morning that payroll employment in February had increased from the previous year in most of the nation’s metro areas:  “267 metropolitan areas reported over-the-year increases in nonfarm payroll employment, 98 reported decreases, and 7 had no change.”  Here in Arkansas, metro employment was up in only four metro areas (Fayetteville, Little Rock, Memphis, and Texarkana) and it was lower in the other four (Fort Smith, Hot Springs, Jonesboro, and Pine Bluff).

Seasonally adjusted data show that from January to February, employment declined in most of Arkansas’ metro areas.  Hot Springs, in particular, showed a substantial monthly decline.  In contrast, employment was up sharply in Texarkana and also rose in Fayetteville and Memphis.  Since the national and statewide employment trough of February 2010, employment growth rates around the state have diverged remarkably.  Texarkana, Fayetteville, and Memphis have all out-performed the statewide average.  In Hot Springs, rapid employment growth during 2011 has reversed, and is now lower than its level in February 2010.  In Pine Bluff and Fort Smith, employment has continued to decline.  In fact, employment in Fort Smith is now 12.8% lower than at the start of the recession in December 2007. 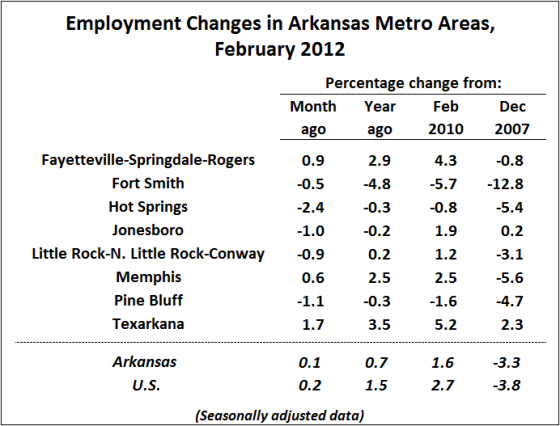 The BLS report also noted that unemployment rates in February were down from the previous year in 344 of the nation’s 372 metro areas.  Four of the eight metro areas in Arkansas were included on this list. 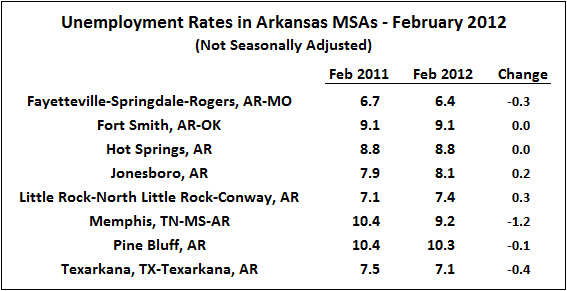 The smoothed seasonally-adjusted unemployment rates for Arkansas MSAs will be available later today.