The Arkansas Realtors® Association reported this morning that Arkansas home sales in July were 20% higher than a year earlier (see the full report here).  Taken in isolation, this statistic suggests considerable improvement in the Arkansas real estate market.  However, a broader look at home sales over the past several months shows that the July data confirm a trend of rather weak home sales during 2011.

As shown in the figure below, home sales tend to reach a seasonal peak during the summer months of June, July and August.  In 2010, however, sales spiked in April due to the expiration of the Federal home-buyers’ tax credit program.  Sales dropped sharply in the following months, with July 2010 showing a sales pace considerably lower than the summer months of previous years.  Sales in July 2011 were clearly higher than they were last summer, but were well-below the level that one would expect during the busy summer months. 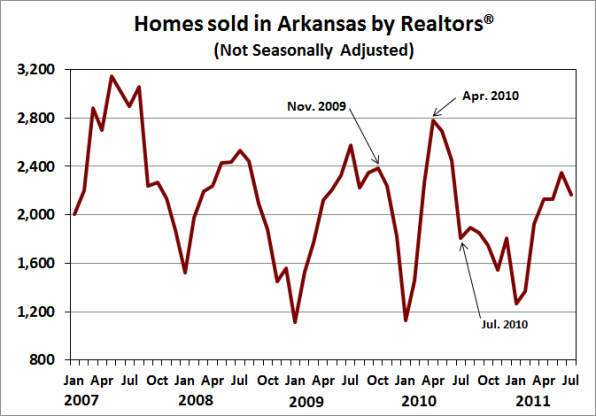 The weakness in home sales during 2011 is illustrated more clearly in the following figure, which shows seasonally adjusted sales data.  After adjusting for the typical pattern of low sales during the winter months and high sales during the summer, the non-seasonal cyclical pattern is more apparent.  So for in 2011, seasonally-adjusted home sales are above the post-tax-credit lull last year, but are not much higher than the during the recessionary period in 2008. 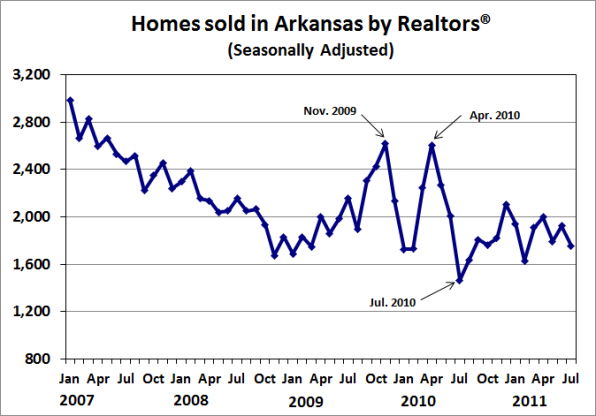 Today’s report from the ARA included cumulative sales statistics that  reinforce the weakness of 2011 sales:  For the year-to-date (January-July), sales in 2011 are down 7.7% from the same period in 2010.  Thus far, the statistics suggest that sales for the year are likely to be lower than in any of the previous five years.

Nevertheless, there is still the possibility of a recovery in coming months.  The home buyers’ tax credit programs sapped some of the strength from 2011 sales by shifting demand forward into 2010.  It is likely that at least some of that demand shift is continuing to depress the pace of current sales.  The more time passes, the more the lagged effects of tax credit programs will wane, revealing the true underlying condition of the Arkansas real estate market.