The Arkansas Realtors® Association (ARA) announced yesterday that January home sales were up 11.6% from the previous year.  After several months of some slow sales growth, the January figures would seem to indicate some improvement in Arkansas residential real estate markets.  However, there are good reasons to avoid being overly enthusiastic about the report.

First, as illustrated in the chart below, January tends to be the slowest sales month of the year.  Although the January 2013 sales total of 1,448 is the highest January total since 2008, total sales in 2013 will depend far more crucially on the sales figures in the peak summer months.  Weak sales in the summer would completely swamp the sales gains from January. 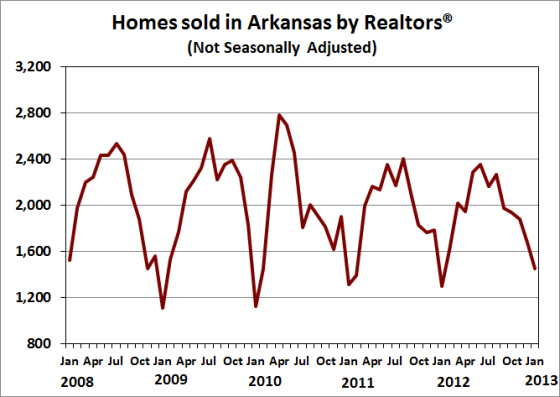 A second reason to be cautious in interpreting the January sales figures is the volatile nature of month-to-month fluctuations in home sales.  The ARA had previously reported that sales in November 2012 were up 6.6% from the previous year but that December sales were down 6.2%.  The January increase should be interpreted in light of this pattern of zig-zags.  Moreover, severe weather in the final week of 2012 might have distorted the statistics for both December and January.  The ARA sales statistics refer to home-sale closings.  With much of the state paralyzed by ice and snow snow, and with many homes and businesses lacking electricity, it is quite possible that some final inspections and closings were delayed until after the start of the new year.  This would help to explain both the downturn in the December sales figures and the sharp increase in January.  If we consider the two-month period of December 2012/January 2013, total sales were up only 1.3% from the same time a year earlier.

Nevertheless, there is reason to be cautiously optimistic about the outlook for home sales in 2013. Financing rates remain at all-time lows, home prices have appear to have bottomed-out, and general economic conditions continue to improve.  Although the sales trend has been flat for the past two years, seasonally-adjusted data shown in the figure below gives some indication of a slight upturn in recent months.  The pace of sales growth in the upcoming spring months should give a better indication of whether this apparent upturn represents a lasting improvement. 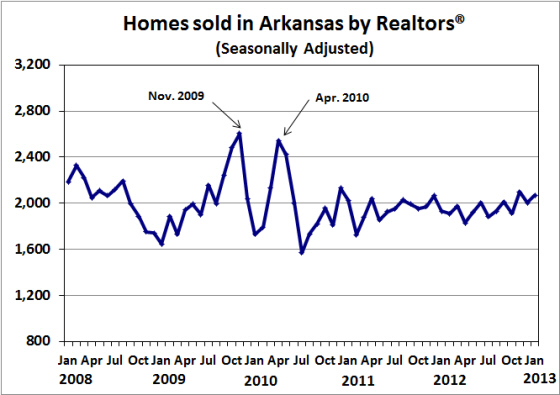