The Commerce Department announced yesterday that 35 states saw merchandise export growth in 2012, and that Arkansas had the second-highest growth rate in the nation.  Total Arkansas exports were $7.6 billion, representing an increase of 36% from 2011 (second only to New Mexico’s 42% growth rate).  During the recession, exports from Arkansas did not decline as sharply as the national total, but had been slower to recover in 2010 and 2011.  The sharp increase in 2012 vaulted Arkansas exports well above the U.S. gain since the export peak of 2008. 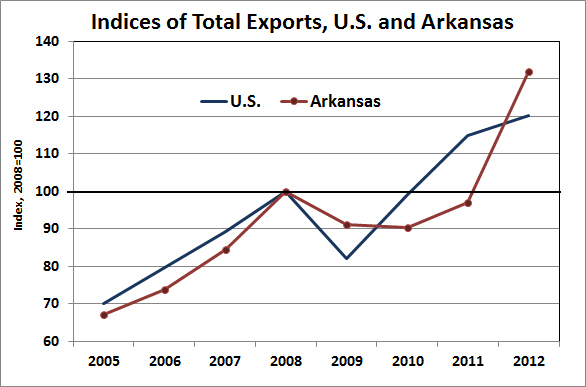 Arkansas’ largest export category in 2012 was Transportation Equipment, comprising 28% of the state’s total.  (Within this category, the state’s leading export is “Civilian Airplanes, Engines and Parts,” but “Graders and Levelers” has also been a recent large contributor.)  After Transportation Equipment, Arkansas’ next-highest export categories are Chemicals and Food Manufactures.  These top three categories accounted for about half of the state’s total value of exports. 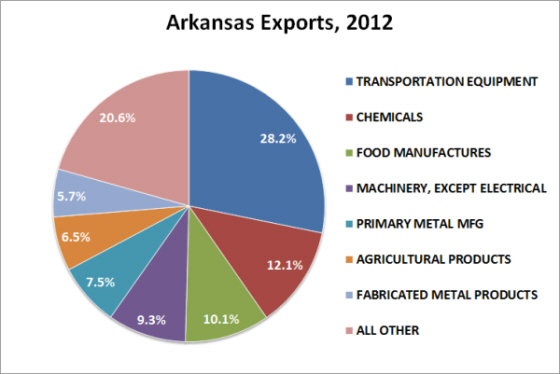 One factor that contributes to a relatively high variability in Arkansas exports is the fact that transportation equipment is such a large component.  This tends to be a “lumpy” category of export goods:  for example, aircraft shipments occur infrequently but in large dollar volumes.  In fact, aircraft exports have even been known to temporarily distort national trade statistics at times (see, here, for example). 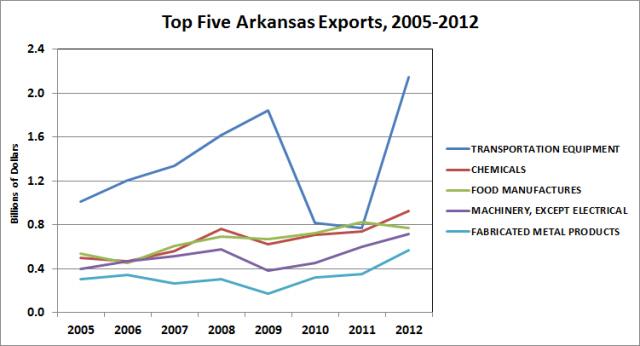