Employment in Arkansas – Reconciling the Accounts

Over the past several months, the Arkansas employment reports have been providing mixed signals.  On the one hand, the unemployment rate has declined dramatically as household employment has risen.  Meanwhile, the payroll employment statistics have shown rather sluggish growth rates.  The chart below compares these two measures of employment.  Although they are compiled from different surveys and measure slightly different concept of employment, the overall patterns of the two series are quite similar.*  The difference between growth rates over the past several months is apparent, however.  From May 2011 through May 2012, household employment has increased by 2.6% while payroll employment has gained only 0.6%. 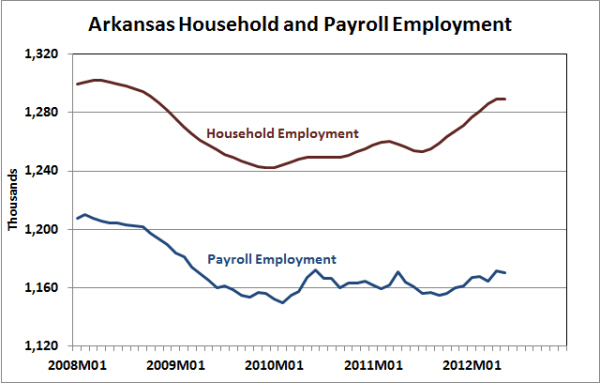 A third data source helps to reconcile these two divergent series.  The Quarterly Census of Employment and Wages (QCEW) represents a more comprehensive and accurate version of the payroll employment statistics.  In fact, the statistics from the QCEW represent the source-data for annual revisions of the payroll employment figures.  These revisions are often substantial (see here and here, for example). 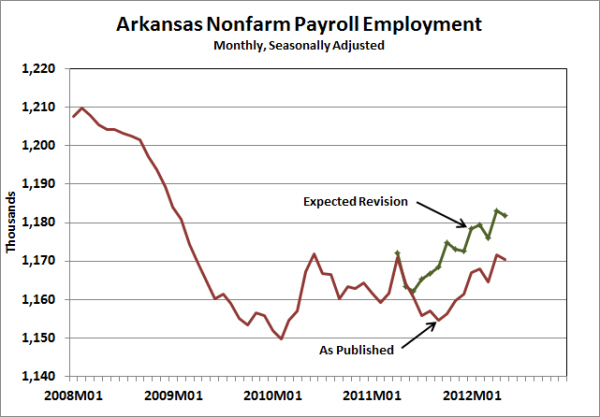 Because the actual benchmark revision will use QCEW data through the first quarter of 2012, the magnitude of the ultimate payroll data revision may end up being even larger.  What we can say for sure at this point is this:  The relatively weak growth of payroll employment observed over the past year is largely the result of preliminary data that under-measure the true extent of Arkansas employment growth.