The unemployment rate in Arkansas ticked downward from 7.3% in May to 7.2% in June.  According to the report from the Bureau of Labor Statistics (BLS), Arkansas was one of only 11 states to see a declining unemployment rate for the month.  Twenty-seven states recorded increases, and 12 states had no change.  The number of unemployed Arkansans declined by 1,884, falling to 99,185.  This was the first time Arkansas unemployment has fallen below 100,000 since February 2009.

The news from the household survey was not entirely positive, however.  The number of employed declined by 2,369 in June after showing essentially no change in the previous month.  As a result, the Arkansas labor force contracted by 4,253 — the first monthly downturn since July 2011.  Over the past several months, the combination of declining unemployment and an expanding labor force had distinguished Arkansas as one of the states where labor markets seemed to be outperforming the national average. 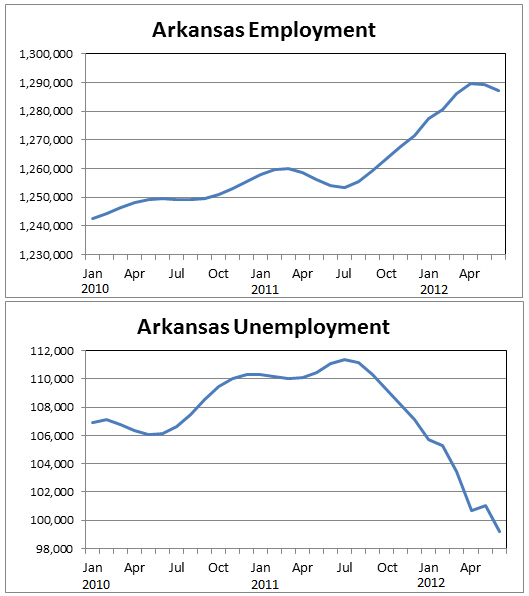 Data from the employer survey confirmed the weakness in employment growth for the month.  Nonfarm payrolls were down 4,300 from the previous month (seasonally adjusted).  Most sectors of the economy experienced job losses, with the notable exception of Education & Health Services, which saw an increase of 2,000 jobs.  Leisure & Hospitality Services, Financial Services, and Wholesale trade also showed slight increases.

On a year-over-year basis, the seasonally adjusted figures show a net increase of 6,900 jobs since June 2011, with gains concentrated in Education & Health Services, and Leisure & Hospitality Services.  Employment in goods-producing sectors continues to languish:  Construction employment was down 3,000 from the previous year, and Manufacturing employment was down by 1,800. 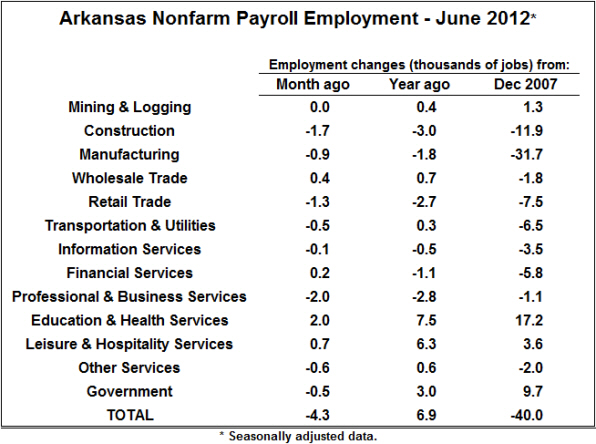 As recently reported here at the Arkansas Economist, the latest data from the Quarterly Census of Employment and Wages (QCEW) seems to be indicating that the payroll employment data will eventually be revised upward.  Specifically, the QCEW data show must stronger job growth in the latter part of 2011 than current employment reports have indicated.  If we take these likely revisions into account, payroll employment from June 2011 through June 2012 has expanded by over 16,000 instead of the 6,900 implied by today’s report. 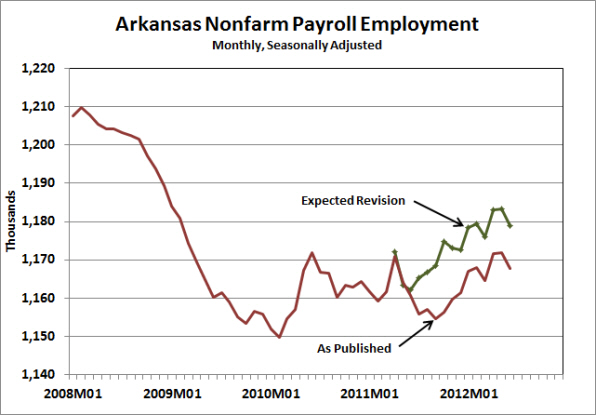