The Arkansas Realtors® Association reported this morning that home sales in August were up nearly 20% from the previous year, with total sales of 2,401 residential units.  The strength of the year-over-year growth in home sales is partly attributable to the expiration of home-buyer’s tax credits in April 2010.  A post-tax-credit  hangover last year suppressed sales over the summer months — usually the peak season for home sales.  As a result, the more normal seasonal pattern of home sales this year looks particularly strong compared to the summer of 2010.

Nevertheless, the August sales totals represent an improvement over previous months.  Last month, we reported that July sales “were well-below the level that one would expect during the busy summer months.”  The August figures are an improvement over July, indicating that the summer peak occured in August this year (as it often does).  The strength of the August data are important for projecting annual sales totals:  August sales typically account for nearly 10% of annual home sales in Arkansas, and the July-August total often accounts for as much as 20% of annual sales.

The chart below shows the patterns of home sales from 2007-2011, both seasonally-adjusted and not-seasonally-adjusted.  The projections shown in the chart are based on an assumption that home sales in September through December will be as strong as indicated in the report for August.  Given typical seasonal patterns, this implies home sales of around 2000 per month in September and October, and nearly 1700 per month in November and December (not seasonally adjusted).  If this strength prevails, the sales total for the year will be about equal to last year’s total.   Under this scenario, therefore, there is about a 50/50 chance that 2011 sales will show an overall improvement over the previous year. 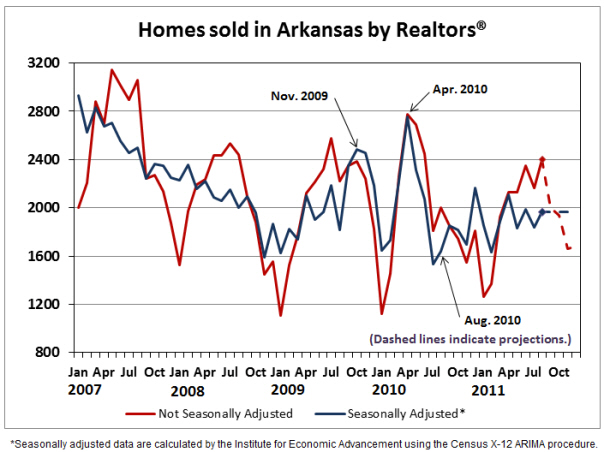 How likely is this optimistic projected scenario?  Much depends on interpreting the sales peaks associated with the home-buyers tax credits in 2009 and 2010.  Total sales during these surges include three types of home-buyers:

The key question pertains to the third group:  How much sooner were households induced to move their home purchases because of the tax credit?  Assuming that a substantial share of these home buyers advanced their purchase plans by months, rather than years,  the market should be returning to more normal patterns in the latter months of 2011.  The strength of the August sales report might therefore be taken as a sign that we are in this more-typical market already.

On the other hand [and there’s always another hand when it comes to economic projections], recent signs of weakness in the general economy and a deterioration of consumer confidence might undermine the pace of home sales in coming months.