The September employment report from the U.S. Bureau of Labor Statistics (BLS) and the Arkansas Department of Workforce Services (DWS) showed that Arkansas’ unemployment rate remained unchanged at 8.3% last month.  Following four consecutive monthly increases, the unchanged unemployment rate represents something of an improvement over recent labor market performance.  In fact, the household survey data showed that the number of employed rose by 3,256, the first increase in the past six months.  The number of unemployed rose by only 362, far below the average rate of change over the previous four months (1,578 was the average increase in unemployment for May-August). 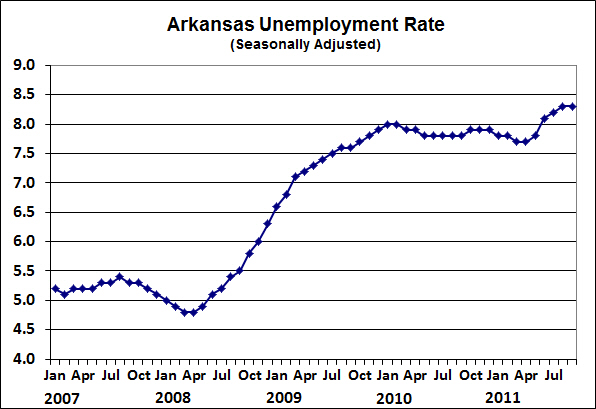 Data from the payroll survey does little to add any optimism to the assessment of Arkansas labor market conditions.  DWS reported an employment increase of more than 10,000 jobs for the month, but also pointed out that many of the gains were attributable to seasonal, back-to-school effects.  This was particularly evident in the State and Local Government sectors, but was also a factor for Education and Health Services.  As shown in the table below, seasonally adjusted data showed a total net decline in September of approximately 1,600 jobs.   Government employment and Education and Health Services showed increases, even after accounting for regular back-to-school effects.  But substantial job losses were evident in Trade, Transportation, and Utilities; and in Leisure and Hospitality Services.  Manufacturing employment was also down sharply.  One bright spot was Construction employment, which has been stagnant since the beginning of the general economic recovery but increased by 1,800 in September.   In spite of job losses over the past five months (-9,000 since April), total employment is up by 2,300 since the end of 2010, and is up by 10,600 over the past twelve months. 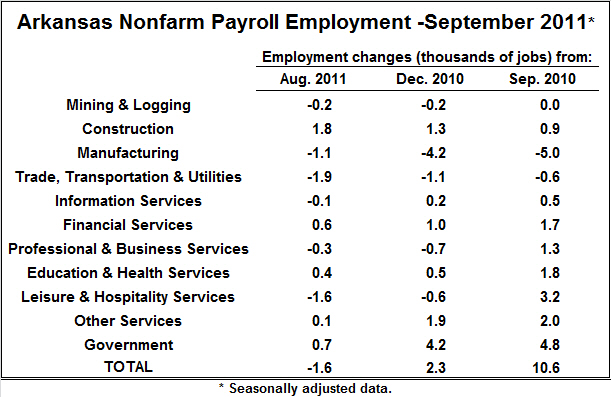 The payroll survey data for September was the fourth decline in the past 5 months.  As shown in the chart below recent declines have erased some of the gains we saw  in late 2010 and early 2011.  In fact, total nonfarm payroll employment in September was slightly below the level recorded in November 2010. 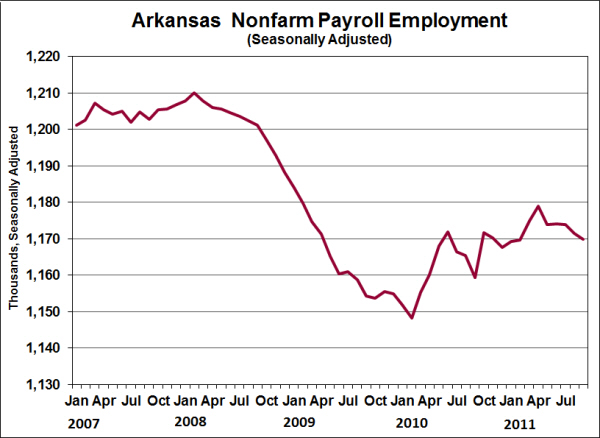