As previously reported, the unemployment rate for the state ticked up one-tenth of a percent in August, so it might appear anomalous that data released this morning by the Bureau of Labor Statistics and Arkansas Workforce Services shows that unemployment rates in each of the state’s metro areas dropped for the month.  The discrepancy is due to the fact that state-level data are seasonally adjusted, whereas the metro area data are reported on a not-seasonally-adjusted basis.  After applying simple statistical procedures for seasonal adjustment, however, unemployment rates in the state’s metro areas generally rose in August — consistent with the statewide data.  (One important seasonal factor affecting unemployment rates in August is the return of teachers to work and students to school.  This tends to lower measured unemployment, but says little about the underlying state of labor markets.  Seasonal adjustment accounts for this recurring pattern.)

As shown in the table below, seasonally-adjusted unemployment rates in August were higher than July in all but two of the state’s Metropolitan Statistical Areas (MSAs).  Memphis was unchanged at 10.2% and Texarkana’s rate ticked down from 7.9% to 7.8%.  Unemployment rates in Fayetteville, Hot Springs, and Jonesboro rose by 0.3%, with smaller increases in Fort Smith, Little Rock and Pine Bluff. 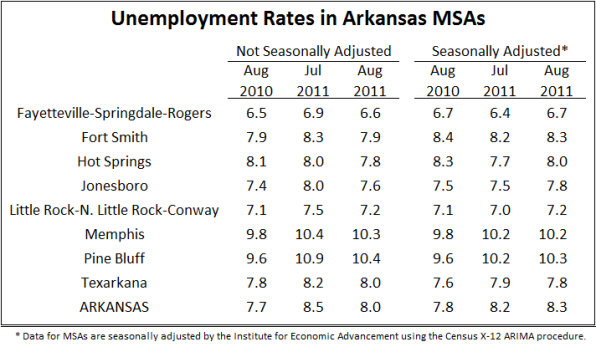 Seasonally adjusted unemployment rates had been declining during the latter part of 2010, but have clearly been on a rising trajectory since the beginning of this year.  Over the past year and a half, Pine Bluff and Memphis have maintained the highest unemployment rates in the state, Fayetteville and Little Rock the lowest rates, with the state’s other MSA’s clustered near the statewide average. 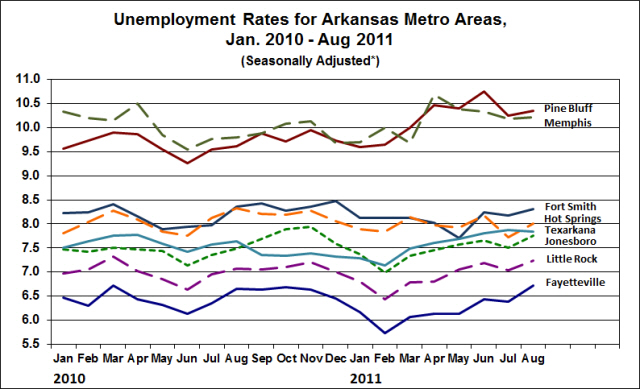 Data from the separate payroll survey reinforces the weakness indicated by the unemployment figures.  From July to August, payroll employment declined in all of Arkansas’ MSAs except Hot Springs.  Compared to a year ago, employment has declined in Fayetteville, Jonesboro, Little Rock, Pine Bluff, and Texarkana.  Since the statewide employment trough in February 2010, however, most of the states metro areas still show positive net job growth.  Only Memphis and Pine Bluff had lower employment in August 2011 than in February 2010.  Compared to the start of the recession, employment in Hot Springs is up by 4.1%, but is lower in all of the other MSAs — ranging from -0.8% in Jonesboro to -8.4% in Memphis. 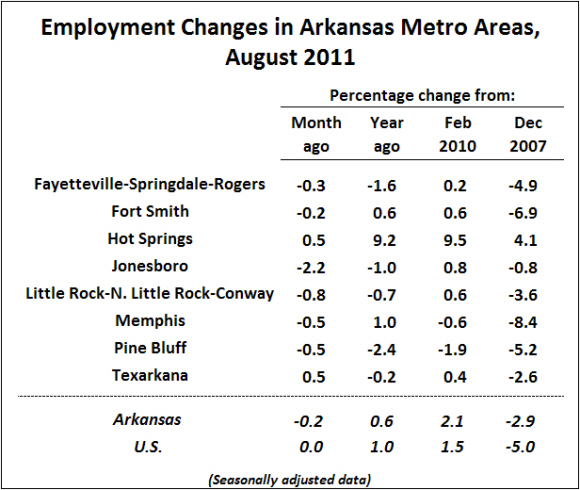