After crunching the numbers from the Arkansas Department of Finance and Administration, Arkansas Taxable Sales (ATS) in the second quarter of 2015 appears to have declined slightly (-0.8%, seasonally adjusted).  Compared to the same time a year earlier, however, ATS was up 3.2%.  A broader measure of spending — Arkansas Taxable Sales Including Gasoline (ATSIG) — was down just one tenth of a percent from the previous quarter, and up 0.8% from the second quarter of 2014. 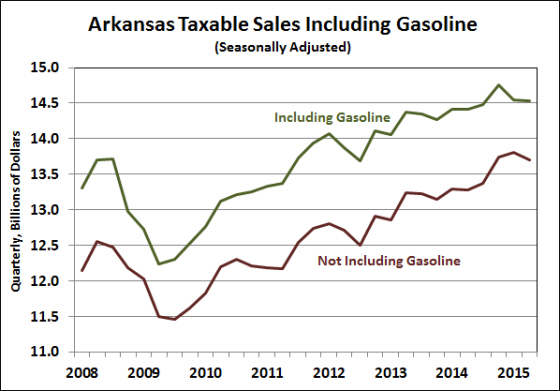 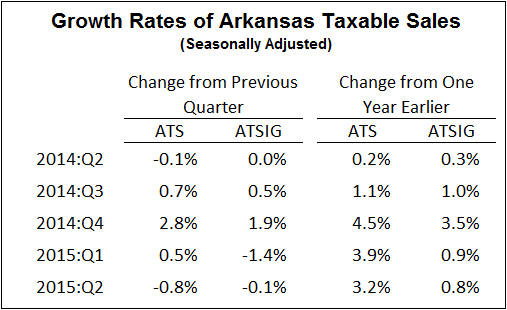 Swings in retail gasoline prices have been important for recent quarterly growth rates.  Although gasoline prices have been trending downward for over a year, prices in the second quarter of 2015 were up slightly from earlier in the year.  According to data from the Oil Price Information Service, gasoline prices in Arkansas averaged $2.40 in the second quarter, up from $2.10 in the first quarter.  Combined with data from the state’s motor fuel tax, we calculate that total spending on gasoline was up 12.3% for the quarter, accounting for the relative strength of ATSIG as compared to ATS.  The higher gasoline prices are also likely to have contributed to the slowdown in non-gasoline consumer spending.

Since peaking in June at $2.52/gallon, Arkansas gasoline prices have again resumed their downward trend.  The average price in August was $2.31, and recent data from the AAA Fuel Gauge Report showing the statewide average at under $2.10 ($2.066 as of today’s date).  The declining gasoline prices are likely to suppress total ATSIG spending in the current quarter, but the extra purchasing power available to households should help support non-gasoline spending.  In fact, preliminary monthly data indicate that ATS has been increasing through the summer months, and was up 8.7% in July (compared to July of the previous year).

Arkansas Taxable Sales (ATS) is calculated by the Institute for Economic Advancement to serve as a timely proxy for Arkansas retail sales. The series is derived from sales and use tax data, adjusting for the relative timing of tax collections and underlying sales, changes in tax laws, and seasonal patterns in the data.  Arkansas Taxable Sales Including Gasoline (ATSIG) incorporates data on the state motor fuel tax and gasoline prices from the Oil Price Information Service. A spreadsheet of the monthly and quarterly data is available here: Arkansas Taxable Sales 2015:Q2 (Excel file).